I have a big problem with comic books movies when they change the facts. There’s admittedly a gray area where a comic book story is so absurd and dated that everybody is better served by updating it. But in the undertaking of a comic book movie, when stories are being combined and the non-fan boy audience is the one that matters, you do absolutely NOTHING for your product when you alter well-established stories and characters. Wolverine’s Origin story has taken years to come to light, and when pieced together it’s not a bad one. However, the number of small, 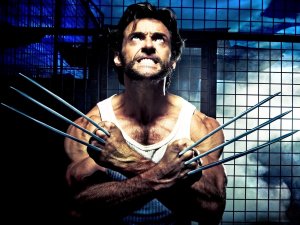 unnecessary changes made to the Wolverine back story is just obnoxious. And the thing that really get’s me about these choices, is that they’re done in an attempt to give the character a morality. What?! That’s the whole thing, I mean, he’s the most badass…the whole point…ok… So his half-brother (BULLSHIT) Sabretooth is the foil that reminds our Wolverine that life is precious, and the last thing you want is to end up as bad as your enemy. Bull-Fucking-Shit! Wolverine’s entire persona is built on his ability to be the bad guy for the greater good. Or to just be the bad guy! Or to just fuck people up and drink a beer! But I digress.

There’s way, way, WAY too much love story in this movie. I understand that there’s a significant portion of Wolverine’s character that deals with his “great love” and avenging her death. Ok, fine, great, why not? But this should always, ALWAYS be referred to. Because, I swear to god, this is in the top 5 LEAST interesting moments in Wolverine’s history. And again, they changed the whole fucking thing anyway, so whatever.

As I said before, this was not constructed with any clear through line, just to say that you really don’t need to see this movie. It sucks dick balls and movies are way too fucking expensive anyway. There are approximately two moments in this movie that are worth seeing, and one of them happens in the trailer (when he slices through a hummer on a motorcycle then flies at a helicopter and there are five or seven explosions in there…it’s not bad).

I’ll tell you what, let me sum it up like this: They can spend what they want, and they can talk about how much they love the source material, but if the two things they focus on in their movie about a cynical killing machine are the pansy-ass conflict between him and his soulless half-brother (which they made up) and a weird and poorly explained betrayal of some faux-native american (which they butchered outright) well then it’s pretty clear they never really knew what they were doing anyway.

P.S. WTF was up with Deadpool? He can’t do any of the things they had him doing at the end of that movie, and the whole point of the fucking character is that he never stops talking. Why the fuck was his mouth all gross and closed up at the end? Ugh. Bad movie.