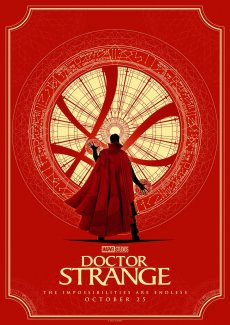 It’s important to understand that what Marvel Studios is doing right now is unprecedented. They just released Doctor Strange, their fourteenth film in a connected series with concrete plans for eight more, a bunker full of characters at their disposal, and money coming in. Movie franchises aren’t new — the first James Bond came out in 1963 — but this is something else: A strictly interconnected universe, with complex character arcs over multiple films, and unparalleled visual set pieces. And because this is unprecedented, Marvel Studios has yet to realize that the frequency and quality of their films have spoiled the audience. It’s how a film like Doctor Strange, one that introduces a character efficiently, hits all the necessary beats with plenty of humorous interjections, and pairs the story to astonishing, unprecedented visual sequences, can only be pretty good.

Doctor Strange is the sixth film in the Marvel series that can be called a true origin story. We meet Dr. Stephen Strange (Benedict Cumberbatch) before he gains his mystical powers, before he reconsiders himself and his role in the world. He is an extraordinary and renowned surgeon, and a cad — flirty and familiar with fellow surgeon Christine Palmer (Rachel McAdams), whose heart he seems to have already broken. He lives in a gorgeous New York apartment with shiny metal and glass and lots of expensive watches. He has a luxury sports car that he drives way too fast, and on a rainy, fated night, Strange’s recklessness catches up. In the crash, Strange’s prized hands are battered beyond repair, and a lengthy and desperate recovery period follows. Once it has cost him his last dime and his last medical connection, Strange begins to chase an impossible possibility. He finds himself in Nepal, and a place called Kamer-Taj, addressing a bald woman called The Ancient One (Tilda Swinton), discovering the sumptuous mysteries of the astral plane, the endless universes, and a monstrous dark being known as Dormammu. 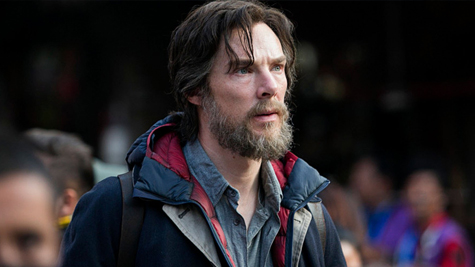 If Doctor Strange were Marvel’s first (or second, or third) outing, I wouldn’t have significant complaints. But it’s their fourteenth, and I understand the structure now. I understand that a character who is initially selfish and unlikeable will redeem himself. That redemption is likely to come in the form of self-sacrifice. That he will make it through to the other side. I understand that, to build rapport with an audience, he will jape when in jeopardy. If there’s time, he will right a personal wrong and regain a lost love. I get it. Doctor Strange does all of these things, and efficiently. But it’s rote. This film’s first act is a list of bullet points, presented plainly and without nuance. We are there for every single step of Strange’s journey to the mystical arts and superheroism. Is it bad? Not at all. But it’s unexceptional. This powerpoint presentation of a hero’s journey isn’t helped by a mundane Cumberbatch, or a less compelling McAdams, but mostly this just feels like the part of the movie the filmmakers weren’t that interested in making. 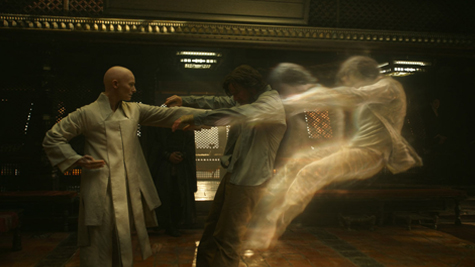 Or possibly didn’t have time for, as substantial amounts of energy and effort have been put into the film’s astonishing visual set pieces. Unlike most of the other Marvel heroes, Doctor Strange is typically found traversing alternate realities, wildly bizarre and extraordinary times and spaces. In the comics these visuals are static, running the gambit of realism, and Doctor Strange is terribly enthusiastic in bringing them to life. When Strange first meets The Ancient One, she introduces him to the mystical arts with a journey through space and time that I can comfortably say is one of the most remarkable visual sequences I’ve ever seen in a theater. It’s not simply the scale or spectacle that impresses, but the diversity of ideas. The world is bent and shifted, growing into infinity, becoming infinitesimal. Colors shift and melt into one another, as Strange travels through all manner of realities. It’s the closing sequence of 2001: A Space Odyssey with hundreds of millions of dollars and the benevolent patience of Kevin Feige. And this just gets us into the second act. 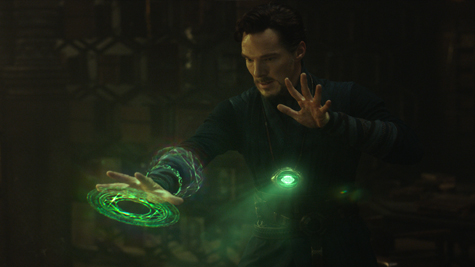 So how do you assess a film that feels both routine and utterly rare? If you walk out of a theater having seen something you’ve never seen before, does that outweigh its evident shortcomings? If a film is the sum of its parts, then Doctor Strange is nothing more than pretty good. But that feels disingenuous, requiring elaboration. More specifically, Doctor Strange is breathtaking and familiar. Remarkably crafted and a little lazy. The kind of film that sets a high bar, then ignores it half the time. It’s a shame to think of what could have been had the character been introduced with some subtlety, but it doesn’t negate the film’s ultimate achievement — bringing the Marvel Cinematic Universe to a new vista of visual possibility.