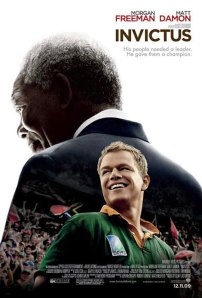 When the World Cup arrives this summer, we’ll see a common banner lining every pitch.  One that reads “SAY NO TO RACISM.”  As a young American, this seems a relatively dated sentiment, but a friend more savvy to the international scene explained it to me: international soccer offers racial tension a passionate arena to catch flame, and all kinds of race resentment is tied into a country’s national pastime.  These already intense matches become entwined with the immensely heated conflict of color, and feverish support of one’s team only fuels the anger.  So the banners seem a sad necessity in a twenty-first century still dealing with the ignorance of the past, and it’s this awareness that motivates Invictus. A story that appraises race relations as the simple matter they can be at heart, while ignoring the complex creature they truly are.

In 1990, Nelson Mandela (Morgan Freeman) is released from prison after 24 years of internment.  Just four years later, after continuing his long battle against apartheid and contributing to the formation of a system of democratic election, he’s elected president.  A public servant in the truest sense of the word, shrugging the crime of the past to avoid the greater crime of inaction.  Mandela attends a match of the South African national team, the Springboks, and he recognizes in its audience the same divide that afflicts his country.  With the Rugby World Cup just a year away, the President sees the potential for unity behind the national team, and quietly enlists the help of the Springboks Captain, Francois Pienaar (Matt Damon).  The team trains hard, and Nelson Mandela tends to the enumerable strains on his country, all while keeping one eye to his squad.  He asks the team to spend some time with their community and the men all grumble, before (of course) seeing the virtue of helping those they once blindly abhorred.  The World Cup arrives and as the Springboks continue to break expectations and rise through the ranks, they find their country, once divided in support, throwing its full weight behind the team that once represented hatred to so many. 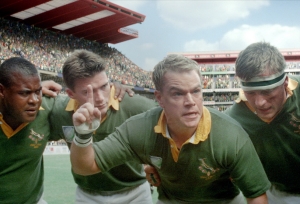 Clint Eastwood‘s approach to this story, to Mandela, to the fraught discord of South African race is simplistic.  Some of this is by design, because racism is a concept we all get, and you only have so much time to get to the story you want to tell.  But other elements are purely lacking the kind of development a discerning audience requires of an Oscar contender.  Mandela as heroic savior, Pienaar his no-nonsense field general.  The immensity of the racial state being much too much to show with depth, Eastwood uses the tension of Mandela’s black and white bodyguards to illustrate the slow change the President brings.  It’s weak and patronizing and forces the question, “What is particularly significant about these bodyguards and why are we spending so much time with them?”  Complex affairs of state are only referenced, and Mandela’s intense focus on rugby seems unrealistic to say the least.  To be fair, the rules change slightly when you’re dealing with a “Based on a True Story.”  There’s less concern with exposition because, ideally, your audience already knows the story.  But being selective with detail doesn’t allow you to also break the current of your plot, as this movie has a tendency to do.  We’re thrust into situations and relationships, without disclosure of why or who.

Clint Eastwood is a practiced and prolific director, which makes it all the more confusing that this film’s assembly is so shoddy.  The structure is confusing, with entirely ambiguous passages of time.  We know the film takes about a year, but other than that time is more or less left to the imagination.  Certain scenes feel incomplete somehow, as though there’s another ten seconds sitting on a cutting room floor somewhere (Yes, I know that’s not how they do it anymore).  Alternately, other scenes keep going and going, well past the point where you’ve gleaned the jist.  Though Rugby is a beloved sport in many countries, American audiences will inevitably yawn during the extended sequence of the World Cup final, which, for such a memorable match and massive upset, feels about as exciting as riding one of those motorized rocketships outside of the grocery store.  Characters, even one as striking as Nelson Mandela, somehow fall flat.  Both Morgan Freeman and Matt Damon are good, but they’re performances rarely move you as an audience member.  It’s not their fault, they’re not given the opportunity.

For as resonant an issue as this film deals with, you might expect to feel more at the close.  South Africa in the mid 90s was a staggeringly emotional place to be, and Mandela’s presence was cathartic.  But Eastwood’s Invictus feels less like a racial drama and more like a sports movie, focusing too much on the how and not enough on the why.  Mandela feels less like the empathic, moving, powerful man he was, and more like a politician turned sports fan.  This is an exaggeration, but significant to my point in that dumbing down complex subject matter and simplifying dynamic characters is a serious mistake.  Add to that a lack of dramatic resonance, and you have a film not doing itself any favors.