Andy Stitzer (Steve Carell) is 40, and he’s a virgin, though his life is filled to brimming with everything that’s not sex.  Priceless heirlooms of childhood and marches round his apartment playing the euphonium.  All manner of video games and one-man karaoke.  Yes, Andy has found a way to simply bombard sexual temptation right out of his head.  Unfortunately for Andy, his new work friends David, Cal and Jay (Paul Rudd, Seth Rogen and Romany Malco), upon hearing his dilemma, take it upon themselves to get him laid.  What follows is a predictable and often hysterical journey towards manhood, with Steve Carell kicking and screaming his way towards the inevitable, ahem, climax.

I don’t think Steve Carell will ever find a character to rival Michael Scott.  I just don’t see how it’s possible when any other role he’s played has been a least a mild disappointment.  Still, Andy Stitzer affords Carell an opportunity to do something different.  Andy is sweet and mild-mannered; a genuine guy whose virginity extends to his notions of the real world.  He’s mostly content with his lot, and in the occasion where his temper may flare, it subsides quickly.  He’s the rare type who actually learns a lesson.  Carell plays the innocence to its most potent, letting bewilderment and wide-eyes be his punchlines.  At a round of speed dating, when a woman’s massive breast slides out of her flimsy top, Andy does his best to keep his eyes skyward and not say anything.  That would be inappropriate.

An element consistent to nearly all of Judd Apatow’s films, written and directed, is ridicule.  This often comes under the guise of friendly, and often outright mean taunting (“You know how I know you’re gay?  You like Coldplay.”). 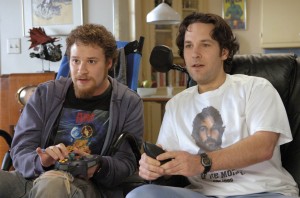 It enters too with outside characters as a quick one-off.  At one point Andy, while flirting with a woman employs Cal’s technique of simply asking question after question.  Though it worked with great success once before, here he falls on his face and the woman is confused to say the least.  Rather though than calmly make her way out of the conversation, she comes back at Andy with a venomous “What are you, fucking retarded?”  Really?  “Fucking retarded?”  Such unbridled hostility!  This is far from an isolated incident in Virgin. One of the first scenes finds Jay facing off with another salesman, the gray-haired Mooj (Gerry Bednob), using language so profane you feel like you’re suddenly watching a Tarantino movie.  It’s clear that Apatow can use anger to great success, and again, it all breeds reality, but there’s something so vicious in these exchanges, and something so unfunny, I can’t be anything but put off.  It’s that asshole seventh grader who thinks all you have to do to get a laugh is yell “fuck.”  I really despise this, not only because it’s weak humor, but because Judd Apatow can do better.

Still, Virgin works well on so many other levels that these brief moments of amateurism can be dismissed.  The gang of guys element brings the funny, as it always has and always will.  Paul Rudd in particular stands out, and Romany Malco makes you wonder why we see so little of him.  Apatow’s wife Leslie Mann shows up in a big way, making all there is to make of a small part turned cameo in retrospect with her latest successes.  She nails so precisely the “drunk club bitch” persona, flirting with but never stepping past the line of absurdity.  And the story passes the test of repeat viewings.  It too has its moments where silliness wrestles past comedy, where a scoff replaces a laugh.  It is, after all, an Apatow production.  But in the end you’re mostly left feeling warm and fuzzy for Steve Carell’s Andy, his journey at its end, his extended adolescence finally and forever closed.  As he and the rest of the cast break into an impromptu song and dance of “Age of Aquarius,” and we watch these actors go a little wacky and have a little fun, you feel as though Judd Apatow, despite his loutish veneer, is really just a guy with a good heart, who wants to help the weirdos feel a little less weird.