There are a number of themes present in Martin Scorsese‘s Shutter Island, but the one most significant to the experience of the film is uncertainty.  From the first moment we meet U.S. Marshal Teddy Daniels (Leonardo DiCaprio) and his partner Chuck (Mark Ruffalo), we’re thrust into a world of pure pandemonium, where it’s not just the chaos of the criminally insane that keeps us intensely uneasy, but also the aloof and decidedly dubious men in charge of the facility on the island.  There’s nothing here to hold on to, and no technique sets an audience on edge quite so effectively.  At one point in the film Teddy comes upon the cell of George Noyce (Jackie Earle Haley), one of the more lucid inmates and a man Teddy has been searching for.  The two men bicker, canvassing their situation while keeping us firmly in the fog, then Noyce comes face to face with the Marshal, “Don’t you get it…?  You’re a rat in a maze.”  He may as well be looking right through the lens, into the audience.

A ferry is the only way to get to Shutter Island, the home of Ashecliff hospital and internment facility for the criminally insane.  U.S. Marshal Teddy Daniels learns this the hard way, losing his breakfast in Scorsese’s opening scene.  Exiting the ship’s bowels he meets, for the first time, his new partner Chuck Aule.  If in viewing this seems an abrupt and puzzling opening sequence, it’s intended.  It’s all intended here, though that’s no reassurance.  The two men arrive at Ashecliff, where they are greeted by the facility’s head psychiatrist, Dr. John Cawley (Ben Kingsley).  Cawley is a man whose allegiance could be to God, or the devil, or both, and Teddy’s subsequent foray into the man’s world keeps us guessing the nature of that allegiance until nearly the end of the film.  Cawley’s madhouse is a living version of one of the horror genre’s favorite devices.  It rivals all the great horror movie insane asylums with its foreboding, with its darkness and endlessness, with its lingering grotesque, but it has one up on the competition: the inmates aren’t dead.  As the story develops, Teddy preservers in his wild goose chase, holding on to, if nothing else, the notion that the chase matters.  His war is waged against anyone and everyone, and his devotion to the cause is neither weak nor wavering.  Because Teddy was in the real war, the big war, and all the things he witnessed at the Dachau concentration camp haunt him relentlessly.  It’s these old ghosts that drive him, and nurture in him an intimate knowledge of all the truly horrid things men are capable of. 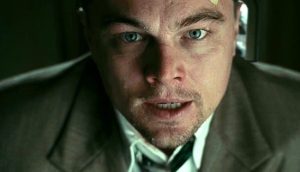 This film resists categorization for everything it hopes to accomplish, but it lives most comfortably as a psychological thriller.  As much as Teddy Daniels never really knows the truth, so are we forced to speculate on the true nature of reality until just moments before the film’s end.  This constant uncertainty is both an asset and an annoyance, and even once the truth has supposedly been revealed we still don’t trust it, so complete is Scorsese’s environment of equivocation.  No character can be trusted, no lie seems complete, and nothing here is remotely close to certain.  Trying to arrive at a theme then seems nearly an impossibility, though there’s no shortage of “theme speak.”  In Teddy’s lone scene with Ashecliff’s Warden (Ted Levine) and one of the film’s more transcendent moments, the Warden outlines the consummate purity of violence, and the connection Teddy and he share as men of violence.  “There is no moral order at all. There is only this – can my violence conquer yours?”

The old haunted house aspect of Shutter Island is an element potentially more confusing than significant to the plot.  When you see the trailer for the film you expect to be startled and horrified by the arrangement of the hospital and its inner workings, but the dreadful parts are all purely cosmetic.  The degraded state of the inmates and the ever present lurking shadows, awful as they may be, are never clearly defined as a danger.  Not for Teddy at least.  It’s all just window dressing for the grandly monstrous Ashecliff facility.  Still, as meticulously adorned as the setting may be, and as much as Scorsese seems to be pulling from classic horror mise en scène, if you watch Shutter Island expecting a horror movie you will be disappointed.  The only monsters here are the past and the present, and the only murderer we’re concerned about is a ghost.  Anyway, the themes at work here are a trifle too grand for a horror movie.

And those themes?  Uncertainty, and it goes without saying that fear is prevalent.  But further than that are questions about the nature of man and the things he’s capable of.  Questions about right and wrong and deed and intent.  These are broad, sweeping concepts, and deriving a moral isn’t an easy venture by any stretch.  To illustrate: just as the film is nearing its close, Teddy sizes up the hospital grounds and considers the future of its inmates: “You know, this place makes me wonder…which would be worse, to live as a monster, or to die as a good man?”  More significant perhaps than the ideas this question fosters is the fact that it’s a question.  Yet again we find ourselves in the dark.  With Shutter Island, nothing seems quite so important to Scorsese (or Dennis Lehane) as reminding the audience that no significant truth will ever come easily.