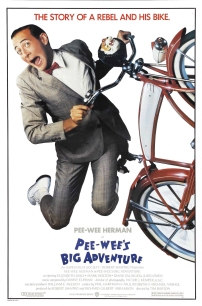 Growing up, I watched what can only be called an excessive amount of television.  I wasn’t a critical viewer by any means, though there were certain shows I recognized as distinct.  While any number of kid’s shows are quite apparently written with their primary audience in mind, there’s that special neighborhood of children’s programming that bridges the gap between kids and adults.  Growing up it was shows like Rocco’s Modern Life and Ren and Stimpy, and perhaps the paramount example of walking that tightrope, Pee-Wee’s Playhouse. Though the bizarre and shamefully over dramatized Paul Reubens porno theater incident relegated the man and his show to some sleazy back alley of my mind for a few years, adulthood has shed a little more light on the reality and I can thankfully appreciate Pee-Wee again.  The real life cartoon character.  The technicolor man child.  The adult who somehow established precisely the life and lifestyle I envisioned for myself as a seven-year-old sugar fiend.

Pee-Wee’s Big Adventure has the same impetus (more or less) as Bicycle Thieves; a man loses his bike, which for him represents pretty much everything, and spends around an hour and a half searching desperately.  The two films diverge at the end, with De Sica’s protagonist going home empty handed and Pee-Wee winning the day, but the two plots are simple and clean, allowing one singular conflict to 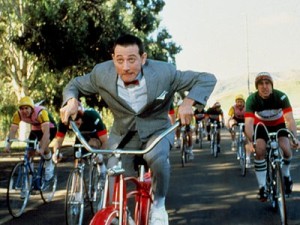 drive the characters toward an endless number of minor ones.  And Pee-Wee’s myriad troubles range from his rich, obnoxious counterpart Francis Buxton (Mark Holton), to the jealous and enormous boyfriend of a sweet waitress named Simone (Diane Salinger), to hitching a ride with a ghost called Large Marge (Alice Nunn), to pissing off a bar full of raucous bikers, to the fawning crush of the adorable Dottie (Elizabeth Daily).  Pee-Wee’s resilience to all the bizarre adversity is heroic, and when he eventually does track down his bike the climactic chase scene through a hectic Warner Bros. lot, while full of slapstick hilarity, feels somehow dramatically tense.  The bike is the damsel, Pee-Wee is the champion, and their love is true.  The notion of these two being separated is genuinely and shockingly heartbreaking.

This is Tim Burton‘s first full-length feature.  Isn’t that something?  And he followed it with Beetlejuice, Batman, and Edward Scissorhands. Five years, and four films that, it could be argued are his four best.  I don’t want to disparage a guy who’s done so much great work, but I think it’s safe to say he’s past his prime.  It’s not that his contemporary attempts are bad, but they don’t hold a candle to these early successes, Pee-Wee’s Big Adventure most certainly included.  While this may be a kid’s movie, it is supremely entertaining for adults, with Burton and Reubens somehow keeping a toe on both sides of the line.  With the humor they do what any good ageless kid’s show does: they keep it constant and conglomerate.  Pee-Wee is silly and sly, and never stays in one place with his jokes.  The whole “There’s no basement in the Alamo” fell to the ground when they tried it on Kid Me, yet this time around I laughed out loud.  And Mickey (Judd Omen), the hardened ex-con who committed the loathsome crime of tearing the tag off a mattress?  Clearly this is not a joke that little kids are supposed to get.  But it’s not just the flux of humor that appeals to a varied age range.  Tim Burton’s style has always been strange, and at times can flirt with off-putting, but here he somehow instills his brand into a script that, in the hands of another director, might be called just silly.  This film has moments that are the scary kind of fun.  Mickey, though apparently harmless, is still sinister.  And Large Marge  is terrifying.  I’ll never erase from my mind the image of a shrieking Pee-Wee running from a burning pet store with two handfuls of snakes.  Imagine, with no context, walking through a modern art gallery and seeing this moment as a still life.  Yipes!  This was a point in time where Tim Burton’s future, both in regards to his narrative and style was a big question mark, but in hindsight his fingerprints are all over the film.

It’s exciting to rediscover Pee-Wee’s Big Adventure.  It’s one of the movies I watched ten times plus as a kid, and it meant a lot to me then.  Rewatching those movies I loved so desperately and finding out how bad they really were is always such a disappointment, so finding a genuine success is motivating.  I should dust off some of those kid flicks and see how they stand up.  Certainly a good indication will be my parents memory of them.  Movies like Pee-Wee, or Ghostbusters, or The Muppet Movie; movies that my parents and I could watch together and both enjoy fully, these are the ones that last.  These are the ones that you get to appreciate with two entirely different perspectives.