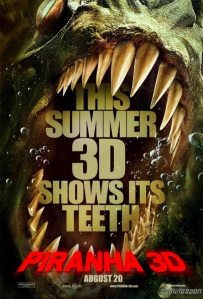 3D film is a gimmick.  It doesn’t contribute in any regard other than the visual experience, and despite all the current hype, it’s a one-trick pony that seems to have been mostly explored.  That’s not to say everything has been done, but ultimately the 3D experience has only so much to offer.  With this in mind I was actually excited by the prospect of Piranha 3D. If 3D film is a purely visual device with essentially zero regard for story, then it stands to reason that the perfect platform for this technology is a film like Piranha; an over-the-top celebration of boobs and blood.  Much like pornography the film is quite

apparently unconcerned with story, doing just enough to get you to the next massacre.  I was eager to see how this would play out and came into the film with high hopes.  Much like the endless hotties dancing on boats, those hopes got really drunk, took off their tops and were promptly eaten alive.

Spring Break in Lake Victoria is an epic event, drawing hoards of dude bros and drunk babes to it’s shores.  This year the notorious pornographer Derrick Jones (Jerry O’Connell) is in attendance and buys the services of a doe-eyed local kid, Jake Forester (Steven R. McQueen) and his would-be girlfriend Kelly (Jessica Szohr) to show him the lake’s hot spots.  Jake’s mom Julie (Elisabeth Shue) is the local sheriff, and along with Deputy Fallon (Ving Rhames) discovers the mutilated corpse of small-time fisherman Matt Hooper (Richard Dreyfuss), setting in motion a chain of events that leads to a massacre so bloody it could have been directed by Mel Gibson.

And blood.  Oh the blood.  I’m generally neither impressed or repulsed by gore, yet somehow Piranha 3D did both.  In it’s lighter moments, the film’s bloodiness is softened by it’s humor.  As the detestable Derrick is pulled from the water, his mangled lower torso dangling beneath him, he has breath enough only to whisper, “they took my dick…they took my dick.”

And in case the words don’t paint a picture, we shortly thereafter see a piranha cough up the mangled member in all the glorious 21st century tech of 3D.  The flip side to the fun violence is the stuff that’s genuinely horrifying.  This mostly encompasses the Spring Break massacre wherein shocking numbers of people are mutilated and slaughtered in a variety of awful ways.  Genuinely I’ve never seen the quantity or quality of rubber carnage featured in this flick.  Of all the things I imagined thinking, “How the hell did they do that?” was never one of them.  My awe often turned to disgust though, with a vast number of cringe-worthy deaths.  At one point a line holding up a floating stage snaps and rips through two women, their halved bodies sliding apart and collapsing into guts.  Later, a panicked Breaker hops into a boat and makes his way towards the shore, running over body after body.  When a woman’s hair gets caught in the motor…well, ugh.  It’s one of the worst things I’ve ever seen happen on film.

I appreciate that people want this type of horror movie carnage, and I respect (to an extent) it’s roots.  Movies like The Thing are a joy to watch and will never get old.  But I also think there are rules to this sort of thing.  For instance, humor tames violence, keeping it palatable.  It also helps if the victim of the violence has done something to deserve it.  Certainly Derrick the porn guy cements his reputation as a prick, and we’re all happy to see him go.  But there are just as many nameless innocents who die horrifically and that’s just not always fun to watch.  Finally, I think as we do more and more to close the gap between reality and visual effects, we have to be careful with the kind of imagery we’re capable of creating.  For anyone who’s ever accidentally watched one of those notorious internet videos of someone being killed or maimed, you know how hard it is to unsee these things.  Well, anymore there’s a point with effects where you risk showing your audience something they hadn’t bargained for, something they can’t unsee.  The goal of Piranha 3D can’t have been to disturb it’s audience, yet for all my supposed desensitization, I left feeling just a little bit sick to my stomach.

The casting is an interesting point of note, with Elisabeth Shue seeming to take her role as Sheriff and brawny heroine very seriously, while the film’s hilarious exposition monger Mr. Goodman (Christopher Lloyd) is as close to a cartoon character as you can get.  If you ask me, this is what all the characters should have been, and mistakes like this can’t be traced to anyone but the director.

And as for the 3D, it’s mostly relegated to fish swimming close to the camera with their mouths open and sharp things flying at you.  At one point a drunken Kelly vomits over the edge of a boat, directly into the camera, and you think to yourself, “Ew.” Otherwise the only cinematography that actually impresses is the abundance of underwater work.  While the above surface pictures are entirely commonplace, the underside of Lake Victoria is dark and clear and often quite scary.  Believe it or not, cinematography didn’t originally make it on to my list of “things that will be good about this film.“

So then, Piranha 3D is more or less what you expected it to be, albeit a crappier version.  Rotten Tomatoes somehow has the movie rated around an 80%, which means either that most viewings include complimentary crack or critics enjoy defying expectations.  Either way, the film is not 5% worse than Inception, nor is it close to 42% better than the perfectly pleasant Eat Pray Love. It is nothing more or less than what it is: Horror porn schlock with big names and a big budget, and absolutely zero regard for any of the elements that make a film “smart.”  Put another way: a movie about killer fish with lots of boobs and blood and Chrstopher Lloyd reprising his role as Dr. Emmitt Brown except he’s older and this time he knows fish.