Kanye West made a film.  It’s mostly music and clocks in at 34 minutes, but there’s not really anything else to call it.  One can claim all day that MJ originated the massive music video event, with “Thriller” and “Black or White” dominating their respective premieres and inserting themselves into the culture for the days and weeks that followed.  You could even point to 1988’s Moonwalker as a legitimate, feature-length film, though I haven’t watched it in a decade or two and doubt it holds up.  But Kanye West has produced and directed a short musical film.  And you know what?  It’s pretty damn good.

Let me start by saying I am a Kanye West supporter.  His shenanigans seem to me, though often inappropriate and informed by his massive ego, mostly harmless.  I’m not offended by arrogance enough to dismiss somebody, and Taylor Swift doesn’t need anymore championing.  I believe that he is a brilliant artist, that his music continues to improve, and that in the future he will be considered a hugely important contributor to (our) contemporary music scene.  The only reason I mention any of this is that judging music (or musical film) in an objective way is harder than judging film and I want to make it clear that am in his corner.

That said, I think anyone with an open mind can appreciate what he’s done here with Runaway. This is the kind of event that MJ lived for.  A celebration of music and video that feels surprisingly original yet not terribly inaccessible.  The film begins with a brief and strange narrative intro from Nicky Minaj, then lands on West driving some beautiful car through a beautiful forest under an eerily beautiful sky.  Here the music feels nearly diagetic, with an old school track seeming to come through the car speakers.  Kanye bumping Kanye.  West finds

himself suddenly the caretaker of a crash landed Phoenix played by Victoria’s Secret model Selita Ebanks.  The film follows their strange courtship, through her inevitable doe-eyed glimpse at the beauty and horror of This Planet Earth and his inevitable collapse into love.  Sadly though, the beautiful Phoenix “must burn,” bringing an abrupt end to their love story.  Unless, as Director West seems to be suggesting with the familiarity of the film’s beginning and end, you simply press play again.

Obviously, the music is the film’s bones and its beauty.  This score/soundtrack/album is simply outstanding.  With some version of almost every track off Kanye’s impending My Beautiful Dark Twisted Fantasy, it’s a hint and a half at what to expect.  Make no mistake though, there’s no diminishing how great this album will surely be.  If anything the edited, elongated, filtered treatment the music receives generates more excitement for the album’s final production.  This is less album-as-soundtrack and more album-blueprint.  This format also allows West to inject some more score-y moments.  Classical references and orchestration, manipulations of a track to coexist with the visuals, and so on.  Runaway illustrates without qualification Kanye West’s complete understanding of the way an audience listens, and more importantly, his ability to take advantage of their attention.  This film, regardless of its connection to the forthcoming album, is a musical achievement.

Still, while we can laud all day the man’s musical capacity, film works on more levels than auditory.  Two questions then.  How is the story?  How does it look?  The story, written by Hype Williams, is passable.  It depends on the fairly traditional tale of a creature (alien, robot, infant, etc.) whose utter innocence to the world must be carefully amended.  When the Phoenix becomes fascinated by a Czech newscaster, Kanye turns off the TV and announces “First rule in this world, Baby.  Don’t pay attention to anything you see on the news.” It’s these smallish but not insignificant moments that reveal Kanye’s own connection to the Phoenix.  She is him and not him, and this “burn” and rebirth is both lamentable and welcome.  In the moments between music there is a surprising amount of silence.  This is probably for the best, as the dialogue is probably the film’s biggest weakness, mostly feeling trite or confusing.  The story is interesting, but never more than that.  Here, as in so many other films worth our time, story is just a vehicle.

The film’s look is a more important and more complex consideration.  More important because “music videos” rarely possess any sort of narrative and more complex because there’s quite a lot for you to see here.  There’s the purely beautiful moments, when Kanye sprints towards the camera through a wide hallway of foggy, dusky forest; there’s visual imagery, enumerable explosions and 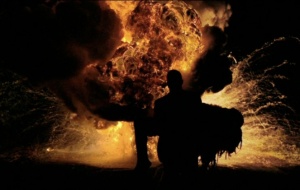 fires signifying this purge of the past and hope for the future; and the more glaringly music video moments, a group of conspicuously plain ballerinas moving elegantly to the film’s titular track.  This is a lovingly shot piece of film, and surely the concision allowed more attention to be paid to each shot.  The film has a color palette and a style that somehow compliment the music perfectly without ever surpassing it.

All said, this is a job well done by an artist in his prime.  His venture into film, though sure to be disparaged by his nation of critics, is a success.  There are negatives here.  Occasionally things feel a little too “arthouse,” and Kanye West is quite definitively NOT a good actor.  But these things don’t really matter, as this is a presentation of musical storytelling and hardly Kanye’s attempt to break into Hollywood.  What matters is how immensely satisfying Runaway is as a viewing experience.  It’s far from traditional, but this is one of those moments in independent film that is both refreshing and inspiring.  Whether it’s his art or his arrogance, something has guided Kanye West to make a pretty worthy contribution to music and art.