For an animated film to thrive, it has to do something we haven’t seen an animated film do before. Back in the early aughts this was far simpler, as computer-generated animation was still novelty enough to stand more or less alone if needed. But as more and more studios get into the remarkably lucrative game of computer-animated flicks, we’re seeing more and more films that flirt with other themes and genres. Cloudy with a Chance of Meatballs was more screwball comedy then kid’s movie, and the Neil Gaiman-sourced Coraline has a very eery and enjoyable darkness to it. This movement away from the center has not been lost on director Gore Verbinski in his first film in five years that doesn’t have Pirates in the title: Rango.

Rango (Johnny Depp) is a lonesome pet chameleon, living in a terrarium, talking to toys, right up to the point where he’s accidentally stranded in the middle of the Mojave desert. Here he will walk for days and escape the clutches of a vicious hawk, meet a country strong lady chameleon named Beans (Isla Fisher) and, like the protagonist in any good western, stroll into the local town an unknown quantity, a stranger. The town is called Dirt, and it’s populated by some of the most haggard-looking creatures you’ve ever seen. These poor animals are nearly out of water, their bank depository down to just five or six days of the precious nourishment. The town’s mayor Tortoise John (Ned Beatty) appoints Rango as Dirt’s new sheriff, a role that Rango adopt wholeheartedly, despite his utter lack of bravery or brawn. From there, in the words of the film’s Owl Mariachi Narrator, “the stranger basks in the adulation of his new friends, sinking deeper into the guacamole of his own deception.” 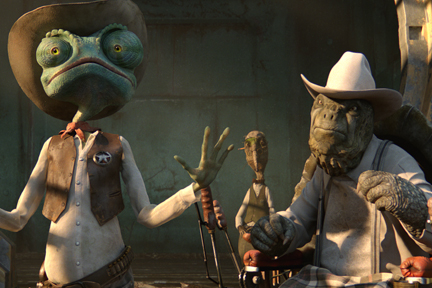 The expectation that an animated film will be a kid’s movie is a hard one to shed. All the prior examples generally suggest that animated means for kids, and because even the animated films that attempt to break this chain only do it tepidly, you end up with a final product that’s often straddling the fence. A good example of this is the animated feature 9, with Elijah Wood playing a magical potato sack man in a steam punk dystopia. Though the established elements of 9 were recognizable as set pieces for a younger demographic, the story and visuals had some truly dark moments. This same audience blurring is evident in Rango. At times the film’s tone is light, the comedy slapstick and enjoyably adolescent. At other times though, there are serious implications of death and elaborately violent gun battles. To be clear, this is not a criticism. It is this very genre-jumping that I was just moments ago heralding as a necessary direction for animated features, and this film’s treatment of action is nothing if not impressive. Rango‘s devotion to the tropes of westerns is precisely what gives the film its own personality, and in many cases, what keeps it fun. But it does have moments of darkness and intensity that might not be perfect for every last audience member. This is not an animated film with the gleam of a Toy Story or How to Train Your Dragon. It’s dingy, and rough around the edges, and even occasionally surreal in a not inconsequential way. Put more plainly, the uncompromising nature of Rango just might, occasionally, freak out the kiddies.

What parents can count on though is one more film that reminds kids that it’s ok to be different. Rango takes a fresh look at the hugely popular theme of the outsider looking in that’s been around since Walt Disney first sat down at a drawing board. While the character is a bit of an enigma, we know enough about him to appreciate his status as a foreigner. These characters are perfect for kids to connect with, precisely because they’re established with social inadequacies all kids can empathize with. Feeling alone or disconnected from any of the myriad groups children form is hardly a unique feeling, yet every child that feels it feels as though they are the first. Any kid’s film that takes advantage of this emotionally-resonant theme to tell a story is almost guaranteed to reach its audience. Rango certainly does, and couples that visceral connection with some of the best animated action sequences since The Incredibles.

Though it can feel a bit slipshod, Rango is a perfectly fun feature with just enough of the things you haven’t seen. It’s a little dirtier and a little darker, with a protagonist who’s more than a bit crazy, and a supporting cast of joyfully wacky, depression-era creatures. But it’s cleverly wrought, and carefully constructed. Nickelodeon Films seems to have struck oil on their first computer-generated dig, and this success will surely breed a new era for their animated features. Let’s hope they choose to keep the originals coming, and not ride the sequel wave like so many successful first-time features that have come before.