It seems as though only in failure is great ambition ever spoken of as a favorable trait. This isn’t surprising, as a successful project will always be discussed primarily for its success, and an acknowledgment of ambition can be a salve in defeat. But only in the rarest of cases is the architect of a project given credit for, not just the assembly of something great, but the scope and the presence of mind to approach something massive and significant. In film it’s men like Orson Welles, Stanley Kubrick, or even James Cameron; men whose work hinges on innovation and imagination. Terrence Malick is surely a member of this class. In the five films he’s made since 1973, he has consistently (if a bit sparsely) assembled staggeringly beautiful pictures, all with the earnest intention of showing us something true and universal. With The Tree of Life, Malick has created a film that is ambitious and successful, visceral, draining, deeply consequential and lofty enough to be just a bit pretentious. This is the opposite of a director playing it safe. This is a swing for the fences, and a man trying his damnedest to illuminate the kind of mountainous existentialisms that humanity has been mulling for millenia.

It helps to know that The Tree of Life is more a collection of vignettes than a straightforward, three-act film. Better yet, it helps to go into the film with an entirely open mind, because Malick has very little interest in convention. The film’s story is adrift, floating along within the far more crucial elements of tone and emotion. Each vignette begins with a blackout, then a colorful visual created by artist/composer Thomas Wilfred, and finally, a voiceover. These VOs find the characters asking some power supreme an existential question that relates to the coming scene. The film uses silence liberally, leaving viewers with the sense that any dialogue is hugely significant. Still, it’s important to note that here, feeling is far more important than understanding. For viewers unfamiliar with Terrence Malick, it may take some time getting comfortable with the director’s clear focus on culling an emotional reaction, opposed to an intellectual one. Like an abstract artist, Malick wants us to feel our way through his work, allowing our visceral responses to act as guides. It’s a rare experience to have in the theater, particularly this time of year.

There’s no debate on where the scope of this film is pointed. It’s right there in the title. This is a film about nothing less than the mysteries of life, told (mostly) from the point of view of a fairly straightforward, 1950s Texas family. The mother and father (Jessica Chastain and Brad Pitt) are dichotomous, yet eternally bound by real love, both for each other and for their children. Their three boys, Jack (Hunter McCracken), R.L. (Laramie Eppler) and Steve (Tye Sheridan) are all rowdy, yet sensitive and caring. Jack in particular is an intensely emotional boy, constantly on the verge of a new revelation that will throw his world into question. His is the point of view that matters the most, as essentially all of the film is viewed through Adult Jack’s (Sean Penn) lens. Every image, from beginning to end, seems to be a piece of the whole; all of it a medley of dreams, memories, and imagination. When viewed this way, as the contents of one man’s consciousness, The Tree of Life drops a lot of the problems one might encounter if taking the whole of it as reality. It’s vital to recognize that the characters are meant to feel embellished, that the laws of physics and reality don’t always apply, and that every last moment should not and cannot be reconciled. This is freeing, though it’s also a leap that not every viewer is capable of making. 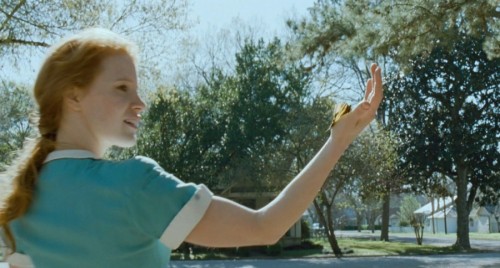 One thing that The Tree of Life absolutely requires, yet may not always be able to deliver on is its personal relevance for each individual viewer. Because there is so little dialogue, it becomes necessary to relate the familiarities in relationships and exchanges to one’s own experience. For a viewer like myself, the oldest of three boys in a loving and occasionally tense family, there is little work to do to find relevance. Still, not every viewer has so near a starting point, and this could certainly present a challenge. For those of us capable of finding relatability in the story, there is a beautiful and intense journey within The Tree of Life. Identifying with these characters is affecting, particularly in recognizing the struggle between mother and father. When you’re young, your parents are nearly caricatures, ideally representing a balance. Your father is strength and protection, your mother is comfort and affection. Then you get older, and you learn that parents, like anybody, are complex. They are not meant to live as foils of one another, but have aspirations and troubles, and have succeeded and failed and continued on, just as you will. This adolescent discovery is unforgettable, and seems to be the impetus for Malick’s fifth film. As we grow, we have no choice but to define ourselves, and very few of us can do so without the example set by our parents.

Eventually, having sifted through everything that makes up this challenging, thoughtful, frustrating, and absolutely gorgeous film, audiences feel they must decide if it is “good” or not. To this I would say that The Tree of Life sets out to do far more than simply entertain us; a notion confusing for many caught up in the summer movie season. From a purely visual standpoint, it is a sumptuous feast of effects and cinematography, like any other Malick film. But past that Terrence Malick’s fifth film is ambitious beyond what most are capable of considering. It is brimming with imagery and, in the moments when it departs from any concrete reality, can be maddening. Still, it is moving. If viewed with an open mind, you will be caught up. It is a film that forces us to acknowledge elements of our own lives we may not have ever considered so fully, and this, to me, is the most significant thing a film can do.