The “hero” as a concept or storytelling device is, and always has been, fluid. Some of us prefer the pure altruist—the Superman who does right simply because he knows what right is. Others need their heroes to be flawed or tragic, like Hamlet—angling for the light even as their blemishes define them. Others hanker for antiheroes, preferring Taxi Driver’s Travis Bickle, a psychotic knight in rusty armor. Indiana Jones is enigmatic in his heroism; vacillating between all heroic traits, occasionally embodying all at once. His position as an archaeologist leads him to scour the globe in the interest of saving and protecting precious antiquities. Yet isn’t the quest for history-defining curios inherently a quest of self-triumph? Dr. Jones, over the course of his story, is at once selfless and selfish, motivated one minute by his moral compass, and the next by the fame and glory latent in uncovering history’s secrets.

It is in this contrast that Indiana Jones (Harrison Ford) has established himself as one of Hollywood’s most compelling film heroes. He’s a scientist with the mental agility of Sherlock Holmes, a fighter in the class of John McClane, and a lover of women second only to James Bond. And now he is the keystone of a bygone era of film, when action and violence and comedy weren’t so aggressively entrenched in their own genres, and a guy like Steven Spielberg wasn’t yet relegated to epics. I’m not a film purist. I tend to think of progress as a positive, and my tastes skew towards contemporary cinema, but the Indiana Jones trilogy stirs a profound kind of nostalgia in me. Yes, I grew up with these films, and any conversation about my personal taste-makers would have to include them, but there’s also something tangibly and uniquely special about the Indiana Jones trilogy (I’ll get to Crystal Skulls momentarily). There’s a confluence of time and place and talent that seems, in the annals of film’s history, fixed and abiding. Star Wars and Return of the Jedi haven’t aged terribly well for me, and while I love those films and certainly appreciate their significance, the Indiana Jones trilogy is far more timeless. Which may be the best barometer of all—I like Indiana Jones more than Star Wars.

Raiders of the Lost Ark

Raiders of the Lost Ark just may be the best character-introduction film ever made. To be clear, I’m not talking about an origin story; Raiders doesn’t have the time or desire to discuss where Indiana Jones came from and how he learned to take a punch. Instead, Steven Spielberg and George Lucas chose to go the route of active exposition, revealing the character to the audience through his choices and action—a brilliant choice, as Steven Spielberg is an exceptional director of action. Consider the opening sequence, within which we discover not only a stellar action set piece, but an extensive amount of information about the protagonist. We quickly grasp the iconic look, and understand that Jones, in addition to being a particularly handsome archaeologist, is a borderline superhero. Leaping over spiked pits and side-stepping booby traps, Indy is clever and self-deprecating, powerful and tenacious, and endlessly cool. Again, this is all delivered in ten minutes of essentially wordless action.

Raiders is jam-packed with Spielberg’s signature blend of action-oriented storytelling. While the film has no trouble developing its characters and relationships, action is Indiana Jones’ element, and Spielberg and Lucas construct an endless supply of fights and and gun battles and car chases to keep him busy. This is certainly the busiest film, covering an impress percentage of the globe. It’s also the most authentic love story, as Marion Ravenwood (Karen Allen) is the closest Indiana Jones ever comes to a soul mate. While Allen’s performance isn’t anything to write home about, she’s well cast as the tom-boyish daughter of a former Jones’ colleague, and their scenes still produce sparks. Though, in fairness to Ford, his Indiana Jones rarely has trouble producing sparks with a female.

Indiana Jones and the Temple of Doom

What’s unique about Temple of Doom is how little it falls in line with the other three films. Outside of Temple, the films tend to follow a fairly consistent structure that begins—in every film—with Jones in the midst of some impossibly dangerous conflict. After escaping by the skin of his teeth, he goes back to his teaching college, before being called into action with a MacGuffin that will end up dictating the rest of the story. Yet in Temple of Doom, Indy never makes it home. After nearly dying in Shanghai, he finds himself tumbling headfirst into a journey for the Sivalinga stones and a village worth of kidnapped children in Northern India. In addition, the other films feature a power-hungry political group as the antagonist (Nazis in Raiders and Crusade, Soviet Russians in Crystal Skull), while the second film’s villain is the head of a subversive Indian cult. Temple of Doom even takes place before the first and third films in the Jones timeline.

This could explain why the middle film has always felt just a bit secondary to the other two, although this could also be explained by the tonal shift from the more general action-centric story in Raiders and Last Crusade, to Temple’s interest in horror. Once he arrives in Pankot Palace, Indy and his traveling mates–Willie Scott (Kate Capshaw) and Short Round (Jonathan Ke Quan)–are treated to a dinner of snake babies and monkey brains before exploring the tenebrous, bug and body-infested innards of the palace. They witness a sacrificial rite wherein a man’s heart is removed from his chest and he’s lowered into a pit of burning magma. Later, Indy is forced to drink the “Blood of Kali,” turning him into a living zombie capable of hurting the only two people who care about him. Pretty dark stuff for a PG-rated film.

Still, you won’t find yourself longing for action, as Temple balances its interest in horror with a few spectacular Spielbergian set pieces. In particular, the hellish rollercoaster ride through the mines of Pankot is an unforgettable sequence. From the setting to the shot selection, Spielberg’s work towards the end of Temple of Doom will remind you of his roots as a director, as well as the pulpy origins of the Jones character.

Indiana Jones and the Last Crusade

Tonally and structurally, Last Crusade is very similar to Raiders. The setup deals with an apparently innocuous trifle, seemingly used only as a focal point for more exposition: the introduction of Henry Jones, Sr. (Sean Connery). But Indy’s father isn’t just the X-factor of the film, he’s the reason Last Crusade is ultimately the best Indiana Jones film. In Raiders, Indiana Jones isn’t really presented with any parallel characters. Marion is like-minded in her interests, but younger and dimmer, while Sallah (John Rhys-Davies) is useful largely as comic relief and muscle. In Last Crusade however, Indiana Jones suddenly has a counter, a mind as sharp as his, and an authority he has no choice but to respect. This is incredibly important to the story, and the casting of Sean Connery as Henry Sr. was a stroke of genius. Connery has spent most of his career playing strong, dominant male characters, yet Henry Jones is an academic. Apart from giving Sean Connery one of the better roles of his career, the calm, distant father serves as an excellent foil to the moodier son, and watching these characters come together in the film gives it a heart the others in the series can’t claim.

Additionally, Last Crusade offers the most intriguing point of convergence. The Holy Grail is a famous mystery, and the film’s treatment of the quest is robust. Indy’s journey to the cup is less reliant on commotion, allowing our hero to spend more time playing the detective role, and that’s where he’s at his most impressive. Refining this balance between action and wit shows Spielberg and Lucas at their best with the character, and the addition of Henry Jones, Sr. as the film’s emotional center is the last best decision they ever made for the franchise.

Indiana Jones and the Kingdom of the Crystal Skull 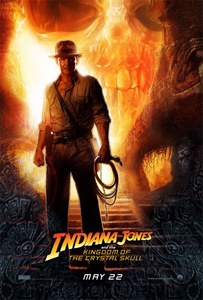 Let me start by saying that, despite what you remember, Crystal Skull is not simply terrible. It’s still an Indiana Jones movie, with Spielberg and Lucas and Ford all reprising, and these guys didn’t get where they are without talent. In fact, it is Spielberg’s direction that probably keeps this thing from derailing spectacularly. You have to dig a little, but there are chunks of this film that are perfectly fine, and watching it certainly isn’t a joyless experience.

It’s just that it’s also a depressing, bewildering, and maddening one.

Crystal Skull is bursting at the seams with ideas, and not in a good way. It’s intent on conveying that old men aren’t useless, while falling over itself to make “Old Indy” jokes. It spends far too much time trying to develop themes of communism and paranoia, with no real function. It wants to tell a love story without actually getting into relationships. And there are aliens.

I think what you realize when watching Crystal Skull is how much Spielberg and Lucas are simply having fun. Certainly this is a luxury they’re entitled to, but they seem to have ignored the potential risks here. What does it do to a great character and a great story when you pull them out of retirement to indulge your whims? If mishandled it can surely hurt the overall legacy of the characters, and even if it doesn’t, the egoism inherent in the act isn’t a secret to the audience. Rehashing is boring, and fails more often than not. Why mess with a good thing?

But the sad truth is, if this franchise continues to move forward, making new Indiana Jones films with new faces, I will watch them. Of course I will, and so will you, because Indiana Jones is that rare breed of hero who seems within our grasp yet transcendent. A man who’s made of the same stuff as you and me, yet is truly worthy of distinction. He is messy and flawed, and doesn’t always have a plan, but at the end of the day Indiana Jones is a character you can have faith in to do the right thing, and succeed at doing it. I can think of no better indication of a true hero.