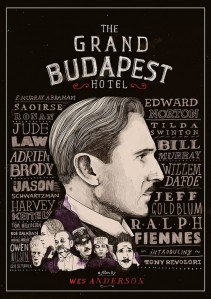 Ralph Fiennes hasn’t been given many chances to act silly. Even his lighter roles end up heavy, which is why his filmography is built on Schindler’s Lists and English Patients. It begs the question of how Wes Anderson landed on Fiennes for his M. Gustave, whose kooky concierge is the comedic axis of the film? — a question answered promptly with a hundred minutes of Fiennes’ inexhaustible talent and charm. This may be Anderson’s purest comedy to date, which says any number of things about the director — he’s lightening up, he’s more interested in genre, he understands how hilarious Willem Dafoe will look with a false, canine-heavy underbite. The Grand Budapest Hotel is another minutely detailed, masterfully constructed film from Wes Anderson, and a reminder that he’s almost certainly the most meticulous director working today.

A young girl enters a cemetery and reads a book in present day. A book written in 1985 by an old author (Tom Wilkinson), about his 1968 stay in a worn down hotel found in the (fictional) country of Zubrowka. There, the younger him (Jude Law) meets an old man named Zero Moustafa (F. Murray Abraham), who, as it turns out, owns the old Grand Budapest Hotel, and knew it in its heyday, a time of war and intrigue. Moustafa tells the young writer the story of his youth as a green lobby boy (Tony Revolori), in love with a daring bakeress (Saoirse Ronan), under the tutelage of the mostly adored and periodically abhorred Monsieur Gustave (Fiennes). 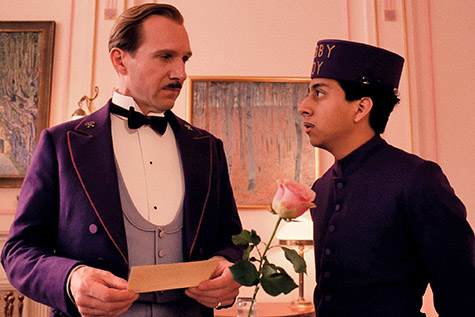 Predictably, the look of Grand Budapest is one of the film’s most substantial layers, and is more intricate than any of Anderson’s other work (save perhaps Fantastic Mr. Fox, for obvious reasons). Certainly Wes Anderson has grown as a director, but his growth has never actually led him to much newness. Instead, he’s continued to explore and perfect the devices that got him here, the most superficial of which is an ability to facilitate his vision without compromise. Attention has certainly been paid to the film’s square aspect ratio, which is an interesting touch point, but may have loomed larger for the director than it does for his audience. The reality is that, as with all Anderson films, it’s the palette and the attention to detail at the root of his spectacle. While the outside of the hotel is a gorgeously intricate scale model, the inside is immense, and immaculate in its niceties. And journeys to the frosty countryside, or the looming Zubrowka prison give the counterfeit nation context within the larger world. It’s a film that insists you look everywhere all at once, which is trying, but also rewarding in the way that only a Wes Anderson film (or a trip to Disney World) can be. 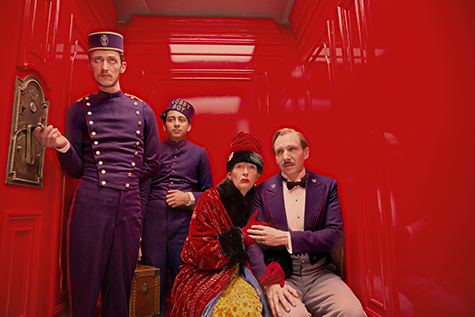 With all of his films, the dedication to detail has been smoothed by the deficit of reality. Even Bottle Rocket — which feels the least fabricated of them all — isn’t worried about depicting the world accurately. The Grand Budapest Hotel feels particularly like Wes Anderson playing make-believe, set in the utterly fabricated Republic of Zubrowka, with a cast composed of vibrantly caricaturized eccentrics. Creating and designing every last detail of the story in his head is certainly simpler without an adherence to real-world logic or visuals, but it also makes a Wes Anderson film uniquely refreshing. We live in an era where films are expected to show us ourselves, where a loyalty to reality is paramount. Wes Anderson’s only loyalty is to the truth of his characters, and the architecture of his vision. 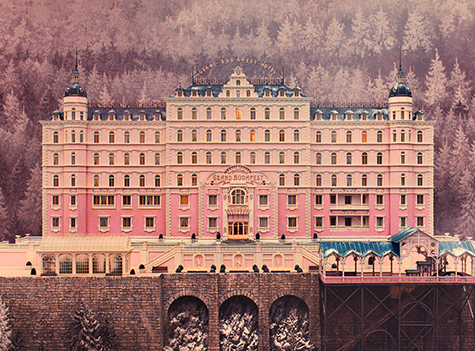 In Grand Budapest, that vision has resulted in an emotionally rich period comedy dressed up with frenetic farce. M. Gustave and Zero possess a kinship far more substantial than the humor often born of it, and the love with which the elder Zero speaks of Gustave —and other lost friends — is, as it turns out, the crux of the film. Anderson’s decision to reveal the stories within the story — the young women reading a book, the author describing his liaison with an elder Zero, and the story of Zero and M. Gustave itself — is all by way of reminding us of the importance of oral tradition. Not for nostalgia, though this has never been absent from the writer/director’s work, but because by telling the stories we have of the loved ones we’ve lost, we keep them alive. It’s simple, really. And delivered with an earnestness that Anderson has never shied away from. Though he’s a storyteller who buries his thesis underneath layers and layers of frosting, Wes Anderson is the purest kind of filmmaker — the kind who uses his films to make us better.