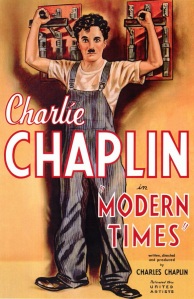 By 1930, “Talkies” were a Hollywood staple; a game-changing technology that slowly but surely eclipsed the landscape of film. Yet in 1936, Charlie Chaplin released Modern Times, an antediluvian “silent” film, and moreover, a thinly-veiled critique of the country’s capitalist devotion to industry; for the times, a brazen choice. Of the decision to avoid recorded dialogue Chaplin said: “Action is more generally understood than words. Like Chinese symbolism, it will mean different things according to its scenic connotation.” While not terribly poetic, this devotion to action effectively reveals Chaplin’s philosophy as a filmmaker. And it certainly jives with Chaplin the Performer, who spent years winning over audiences with his balletic pratfalls and boozer’s grace. As for Modern Times, it is a beautiful depiction of Chaplin’s one of a kind “action,” depicting an artist and performer deeply in his prime. For those of us more familiar with contemporary cinema (i.e. more talking in our movies), Modern Times is a wonderful introduction to a bygone era, and the waddling genius who will forever be associated with it.

END_OF_DOCUMENT_TOKEN_TO_BE_REPLACED

There’s a fine line between the reckless innovation of the New Wave directors and sloppy filmmaking. In the moment, these dramatic departures from the standard must have been thrilling, but with 60 years of film bridging the gap, it’s not hard to see that a film like Breathless is flawed. But it’s also explicitly clear that perfection is besides the point. Apart from the fact that this is Jean-Luc Godard‘s first film, Breathless isn’t meant to be anything more than a joyous expression of youth; an homage to the impulse. It is a bright mélange of joy and frustration, violence and noise, action and reaction, love and longing, and aimlessness; and while no one can deny Godard’s talent behind the camera, there’s something that seems wonderfully serendipitous about his first and most notable film.

END_OF_DOCUMENT_TOKEN_TO_BE_REPLACED

The American Film Institute lists Bonnie and Clyde at number 5 on their list of the top ten gangster films of all time, and 42 on their “100 Years…100 Movies” collection.  IMDb holds it at 218 on their top five hundred.  For the older film generation this will come as no surprise.  Bonnie and Clyde‘s release was loud and unforgettable, and represented a jump to the “New Hollywood.”  Violence and sex were no longer suggestions, and the previously established style of filmmaking was beginning to unravel.  In hindsight the film still distinguishes itself from it’s peers, along with The Graduate, a fellow Best Picture nominee from that year.  But the unfortunate truth of Bonnie and Clyde‘s place in modern day cinema is it’s senescence.  The film simply hasn’t aged well.  It’s legacy lives in it’s forward momentum, and less and less in it’s quality.  It glimpses at things to come, but is by no means an example of transitional perfection.  A brave film that comes from a time where progress was as significant as caliber.