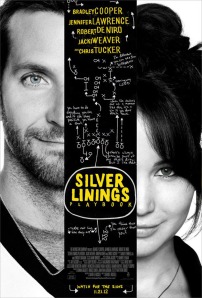 Drawing comparisons between a David O. Russell film and the film of another, more boilerplate Oscar-season director is kind of like comparing the X Games to the Olympics, the latter more prepared to sweep us up in its comforting and controlled familiarity, the former astonishing with its mercurial brilliance. This is not a compliment or critique, but a comment on the thrilling messiness David O. Russell brings as a storyteller. Silver Linings Playbook–Russell’s follow up to the Academy-nominated The Fighter–thrives in this mess, bringing its sundry characters together in a collection of manic fits and starts–appropriate for a film so preoccupied with mental health issues. Playbook is a film with the heart of a romantic comedy and the head of a black comedy, and of this collision is born a visceral, cerebral story about a family with a lot to fix.