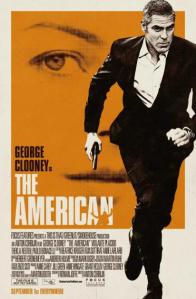 There’s something poetic about The American opening next to Machete, Robert Rodriguez’s latest explosion of cheeky violence.  And Machete is certainly not the only case of superfluous violence in recent memory.  The Expendables, Piranha 3D, The A-Team, even Kick-Ass way back in April.  Film this summer hasn’t had much interest in subtlety or consequences.  Meanwhile Anton Corbijn‘s The American is quietly released, it’s trailer ambiguous and cerebral, it’s only apparent draw for the average movie-goer a shirtless George Clooney.  After an assault of films who hope to stay unrelentingly in your face for a full two hours, The American gently hopes only to do the next best thing: stay in your mind.