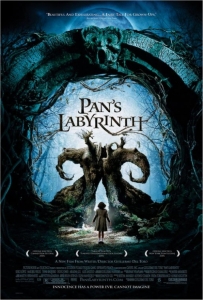 I think at the end of it all, what really got me was how thoroughly unprepared I was for the film as a whole. It’s infinitely darker and more violent than I thought it was going to be, but the darkness is wrapped up in this kind of overwhelming intensity that you’re hard pressed to find in violent films. By that I mean none of the violence ever felt gratuitous, or unnecessary. Further, the fantasy aspect was both beautiful and terrifying. I really don’t find myself scared too often watching a movie, but there were moments here where I was on the edge of my seat with my hand over my mouth, holding my breath. 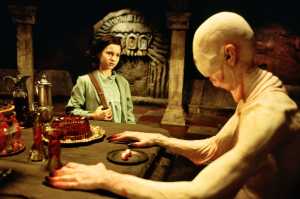 The setting is spectacular. It’s small and contained within this singular countryside while simultaneously reaching into the infinite realm of imagination, and the “war” aspect is really just a small division of soldiers versus an even smaller band of rebels. I feel that it’s hard sometimes to identify emotionally with war when you’re viewing it from far outside, but when you watch from the inside, as you do in this case, you connect more to what’s going on and the characters involved.

As far as characterization I really have to give it up to Guillermo del Toro and his ability to present things as they are, and not more so. Seems to me that there’s a constant attempt to push characters further and make them more and more dynamic, which is great, but sometimes you just have to strip them down to their base and leave them at that. If the point of your film is coming from your characters, than make them complicated, make them grow, but if you’re lesson comes in the story itself, leave the characters alone and let the story do that. The villain (Sergi López) in Pan’s Labyrinth was utterly terrifying and the protagonist, a gorgeous little girl (Ivana Baquero) who I guarantee will be around for awhile, was perfectly innocent and aware at the same time. Neither one was too complex to mislead you or make you wonder what was going on with them. The point of their relationship is what matters and that’s what you get.

In the end the point of the story is to both appreciate innocence and be willing to let go of it. There are things that we have as children that we will never have again, and that’s scary, and depressing, and truly startling when it occurs to us…which it will…watch out. But on the other hand there are things that come with adulthood which we would never be able to experience or enjoy without growing up. The film jumps back and forth between the innocence and adulthood and only in the end are things blended to a pretty universal thesis.