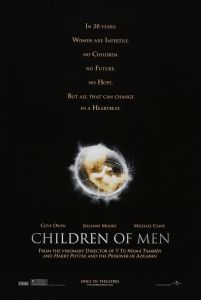 Fifteen minutes or so into the film I started thinking about stories like 1984 and Brave New World. Dystopic futures that motivate us to get some perspective on the state of the world and the state of the potential future. The film takes place 30 or 40 years in the future in a world where women can no longer have children. Everything comes into light when the human race is about to end, and obviously instead of making the necessary changes, we would fall into a massive downward spiral of fear and violence. Smart and thought provoking and very relevant.

Again, the setting and atmosphere of this film were really incredible. I don’t know what it is about British films (I’m mainly thinking of 28 Days Later) but they find the most spectacular locations and never seem to run out of places 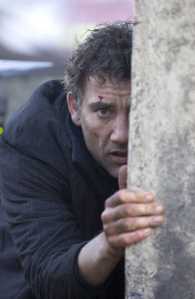 to overhaul or trash. There was detail in these scenes that showed a future that was realistic. The sleek and clean future is naive. While technology is growing exponentially, and tv and computers are sexy as hell, we’ll never have hover cars or perpetually shining skyscrapers. It’s science fiction. What separated this reality from that reality was the dirt and grime that we have in the real world. It was real.

If it suffered on any level it was in some of the performances, and perhaps in the dialogue at certain key moments. In general I just felt like it could have been more dramatic, and there were a few missed opportunities to reach for a higher message in the conversations between the characters. I don’t think these were missed on accident, but the writers and director wanted to go in a different direction at the end.

That said, the action at the end of the movie was really inspired and dramatic. My friend Preston said it reminded him of Saving Private Ryan which I agree with, in the sense that it was really, really intense, and more importantly, you feel immersed. It’s certainly violent and upsetting, so beware, but goddammit I really like it when there’s action that doesn’t feel like a Jerry Bruckheimer movie. Again, it was real.

Interestingly, the message in this movie had something to do with innocence. In this case it’s speaking to the necessity of children and innocence not in the sense of perpetuating our race, but in the sense that it reminds us of a greater duty to our race. What I mean to say is that we often get caught up in the adultness of our lives and it’s important to be reminded that our time here is fleeting and we will leave our own legacies behind in the form of future youth. Also it was very much a commentary on the state of things in the world right now, and sort of a call to step outside of your own individual apathy and do something.