I love Zooey Deschanel. I think she’s adorable and it’s a point of contention in my current relationship. I was thusly disappointed by the character she plays in 500 Days of Summer…no, not disappointed, that’s not right. I hated her character and I hated this movie. Here’s the long and short:

This film comes with the preface, “This is not a love story, but a story about love,” which really doesn’t mean anything at all. In love stories and stories about love we follow two people as they make their way through that universal gauntlet. They struggle with some sort of inner or outer dissonance, and hopefully, finally, find their way to one another and stroll into the sunset of love, prepared forever to face all problems as one. Or not. Whatever. 500 Days of Summer utilizes this introduction to avoid the necessity of a happy ending, or at least one you recognize. Which is fine, if it’s executed properly. 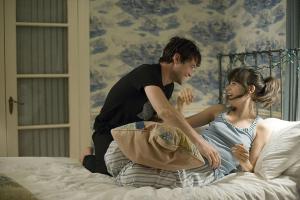 The problem that this movie runs into is that these characters, to put it simply, suck. Tom Hansen (Joseph Gordon-Levitt) is a young West coast hipster with a mildly lame job and the magnificent goal of finding “The One.” Unfortunately Tom is remarkably shallow, and “The One” ends up being the first girl that is attractive, interesting, and interested in him. When she tells him she “doesn’t believe in love,” he takes it as a challenge and this burgeoning romance is off to the races. Tom spends the next half year convincing himself that this girl is perfect and that love is just around the corner, only to end up broken-hearted and bewildered by loneliness. Blah blah. You know what the problem is here? I don’t care. I don’t care because these characters are so weak. Tom is supposedly interesting because he listens to The Smiths and loved The Graduate. Summer because, of all The Beatles, Ringo is her favorite. And the film is covered in this kind of superficiality. We don’t have any concept of why this relationship is so special because we catch only glimpses of it, and the glimpses are meaningless.

Maybe this is intended. Maybe if the audience is won over by Summer’s looks in the way that Tom is, we too will be caught off guard when she ends up being kind of a bitch. But movies don’t work this way. So if this story hinges on us being surprised by Summer’s true self, well, better luck next time.

At any rate, the movie’s problems don’t begin and end with the superficial characters or the weak love story. There are tons of small problems here, which I won’t get in to (though, I have to say, the little sister character was obnoxious…also his friends were dicks…and the way he was such a drama queen with the smashing plates and loudly quitting his job…) but it’s not just the problems. I’ve seen bad movies before, and I generally don’t care enough to let it bother me. But I found that I was offended by this movie. Offended because these characters are, to some extent, supposed to be us. Young, smart, interesting, music-lovers, people who spend their time at record stores and diners. These are people we know, or they’re supposed to be. And if, to an outsider, the representatives of our age group are either these people, or the cast of Real World, that’s not ok! These characters are bad, but worse than that, they’re so unaware of it. They’re so caught up in their own individuality and youth and ugh…