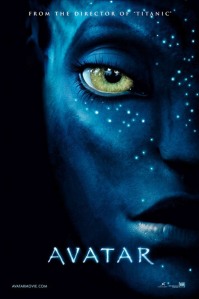 A glance at James Cameron‘s filmography reveals a Director mildly obsessed with doing things on an epic scale.  The only names that come to mind who might epic him out of the top spot would be Bay and Bruckheimer, and those guys don’t generally hold a lot of water with critical minds.  Cameron however seems to ride that line between over the top and elegant.  The distinction most probably lies with Cameron’s credits as a Director and a Writer.  While technology and visual magnificence hold his regard, I don’t believe they do so exclusively.  Particularly with his last few films, James Cameron has shone an eye for story that allows him to do the remarkable things he can do visually while not bombarding his audience with absurd or scoff-worthy moments.  This is not to say that Cameron isn’t melodramatic, but coupling melodrama with compelling characters, complex situations and, again, astonishing visual effects, might just be the perfect recipe for the epic of the new millennium.

Avatar centers on the world of Pandora, where humans have settled with the goal of mining an ambiguous mineral called unobtanium.  On Pandora, the indigenous Na’vi along with the very real dangers of wild Pandoran jungle continually present a logistical problem for the corporate leadership.  Jake Sully (Sam Worthington), a paraplegic ex-marine is brought to Pandora when his twin brother, a scientist trained to drive one of the genetically-engineered avatars is killed, and Jake’s genetic similarities allow him to pilot the creature.  Sully’s forays into the world of the Na’vi with their first daughter Neytiri (Zoe Saldana) and the reality of his human existence eventually blur together, forcing him to choose between the two.

So let’s get it out of the way: the special effects.  Yes, you walk out of this movie saying, “Holy Hell, James Cameron just had sex with my eyeballs!”  This is the best looking computer-animated film that has ever been made.  There’s no way around it.  There are moments in the Pandoran jungle that rival some of Planet Earth‘s best footage, and that’s real life!  It’s not just a matter of how much they were able to accomplish on the technological side of things; what is really thrilling about the things happening onscreen is the level of detail they’ve achieved.  A whole culture of biology exists within the space of three hours.  This is simply astonishing.  If all James Cameron had accomplished here was what you see, he would still be up for twenty-six Oscars and I can’t say for sure that I would disagree with the Academy.

But this is not all that he has accomplished.  Along with creating a visual landscape that we will indeed be talking about until we die, he’s actually put together one hell of a story.  Inventing an entirely original world with it’s own physics and biology and history is remarkably hard, but he goes one step further and establishes an entire mythology that lives within this world.  This is exactly the reason that George Lucas has been deified.  It’s the reason I felt sad when the lights came up in the theater: because we long desperately for worlds and for stories like this one.  Stories where excitement and risk are weighed against the higher cost of not taking action.  I don’t think many people will argue that their own life could be called mundane.  At the very least we recognize that excitement comes in bits and pieces, scattered in between the monotony of a job and a commute and car commercials.   But most of us have been caught up in a quiet yearning for action and stakes and a battle for some kind of cause greater than ourselves.  It’s not that these causes don’t exist in our world, but they certainly don’t compare to that of the Na’vi on Pandora.  Theirs is a plight we can’t imagine living with, but some part of us would give anything to and Cameron has tapped directly into this.  Jake Sully spends his time on Pandora taking a journey both physical and emotional, tipping the balance between two extremes and living through exactly the kind of experience we have spent our lives hoping to have: one that, in the end, truly means something.

This is not to say that Avatar is faultless.  As I said before, Cameron has a penchant for melodrama.  There’s complexity to the altruism of Jake Sully in that it develops overtime, and it must be earned, but the pure evil of Colonel Miles Quaritch (Stephen Lang) is almost too stark to take seriously.  A man who has seen this much war and this much killing would have surely lost some of that blood-lust, wouldn’t he?  And the intensity of the Na’vi, the harmony of their lives, the seriousness of the culture, it all feels a little over the top, doesn’t it?  But remind yourself that this film is supposed to be epic.  It’s intended that it live in the same narrative world as Star Wars or Lord of the Rings, films which for the most part can get away with dialogue that feels unreal and characters that feel a bit fantastical.

In a year when the number of nominees are being bumped up to ten, Avatar will be nominated for Best Picture.  I figured this going into the theater and it seemed a bit of a stretch.  After witnessing Cameron’s best film to date, I can’t honestly say that it might not also be the best film of the year.