I never read Eat Pray Love.  It never seemed like a book written for me.  Vaguely, my understanding of the novel was as one written by a woman and for women.  A self-help memoir for the divorced.  Now that I’ve seen the book’s celluloid abridgement my notions have been, to an extent altered.  Not entirely, for this is still a story about mending a broken heart and Elizabeth Gilbert (Julia Roberts) surely begins that process with the old standby of eating mass quantities of food.  But to say my vague awareness of this incredibly popular book was on point would discount the deeper ideas present in this story.  Gilbert (with help from director and screenwriter Ryan Murphy) isn’t just moaning about her losses.  She’s giving an account of an adventure she had; a journey to the center of her soul.  It’s not perfect, with moments of cloying joy that don’t feel real enough, but it’s all true, and it represents a search as eternal as any.  Whether recently divorced or recently preadolescent, we are all of us looking for our place in the world, and we are all of us praying that it will bring with it some love.

Eat Pray Love tells the story of Elizabeth Gilbert’s divorce from husband Stephen (Billy Crudup), rebound relationship with the younger David (James Franco) and subsequent year-long solo journey from Italy to India to Bali.  It’s a dramatic story to be sure, and one not lacking for intense moments.  To put it more plainly: Julia Roberts does a lot of crying.  The three verbs in the title are loosely broken down to each of the places she visits, with Italy representing the Eat, India the Pray, and Bali–Love. This is almost certainly more of a device to simplify than an indication of the reality, as no excursion can be divided so neatly by it’s contents, but the indicators persist and Gilbert’s therapy comes in three clean parts.  It takes about half of the film to get clear of

her emotional wreckage and also escape the clutches of overindulgent Italy, where the characters (and the film) are far too pleased with themselves to enjoy.  Then, upon Liz’s arrival to India, something happens.  Solemnity is suddenly imposed and the whole experience is better for it.  When Gilbert is gorging herself and cracking wise about the therapeutic nature of wine she comes off as shallow; a woman taking a vacation from her life.  India on the other hand represents a legitimate challenge.  Anybody can eat good food and drink too much wine and long for happiness, but meditation, prayer, real contemplation, these things are work.  These things are hard, and it’s finally here that we come to genuinely like Elizabeth Gilbert.

It’s hard to glean from the trailer exactly what type of film this is.  It could be a romantic comedy or light-hearted but smart drama.  I wasn’t sure what to expect and even afterward the film seemed to defy easy categorization.  Ultimately though, it’s a journey film.  Like The Motorcycle Diaries, or Sideways, Eat Pray Love is a film about searching for something, even when you aren’t entirely sure what that something is.  It’s what comes after that moment when someone says melodramatically “I’ve reached the end of my rope!”  The film employs ambiguity to great effect, keeping both Gilbert and the audience in the dark regarding her quest.  Certainly she seems to have an idea of what it is she’s after, but she would never arrive there without help from a number of wise old souls.  In India she befriends an ornery sumbitch from Texas named Richard (Richard Jenkins), whose own struggle for balance and harmony has taught him a number of lessons he’s willing to impart whether you want them or not.  In Bali she spends much of her time with medicine man Ketut Liyer (Hadi Subiyanto) and becomes his devoted apprentice.  And it’s not just the teachers she learns from, but the individuals she wasn’t even expecting.  This never more true than in the case of Felipe (Javier Bardem), the man who teaches her how to love again.  Their journeys are similar, and perhaps it’s this shared struggle with heartbreak and happiness that brings them together so masterfully.  Whatever the case, Elizabeth’s journey ends with Felipe, at least for our purposes.

Clearly the film lives most colorfully when it’s appealing to the universal nature of searching, and certainly the story is universal.  Still there’s a bit of a monkey wrench thrown into the works when you begin to wonder exactly how real this film can be. 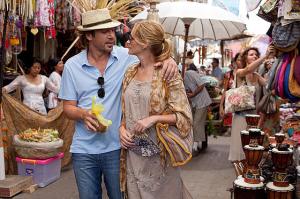 While the story may be 100% accurate, it certainly didn’t happen to Julia Roberts and James Franco and Javier Bardem, but to people far plainer.  These locations are surely picturesque, but how much can we trust what we see considering how much money was spent bringing them to their most picturesque?  It’s a question that comes with every adaptation of a true story.  What is it exactly that is moving me?  Is it the story or is it the immensely endearing nature of Julia Roberts?  Is it the truth of love or the chemistry between her and Bardem?  What if this was simply a documentary?

That said, Eat Pray Love is lovely nonetheless.  It’s occasionally shallow and won’t win any Academy Awards, but much the same as it’s protagonist, it strives for some truth.  Certainly it gains to profit from it’s roots, and everyone involved stands to make a pretty penny, but if we ignore that little gnat than we’re presented with something that at least seems heartfelt, and that’s no small feat.  Though it may require a little sentimentality, the film feels like something charming and true in a world caught up in being cynical.