I never watched the show.  Mr. T was the only aspect that seemed at all intriguing, and he just wasn’t enough to pull me.  And the chafing part of watching The A-Team in theaters is how much of a problem that became.  Without an understanding, without an awareness of the minor characters and the relationships and the dated sense of humor, this film becomes work.  There’s an ever-present potential for reference, which means the under prepared viewer is never able to settle down and simply have an experience.  An experience which, besides it’s desperate obligation to the source, is mostly scrambled and frenetic.  Like most of the summer movies you’ve ever seen, the first priority of The A-Team is to bombard you with action.  I’m not sure what it is about these productions that precludes the possibility of spectacular action AND an enjoyable story.  Certainly it’s not as though we’ve never seen it before (A couple Mission Impossible movies, a few James Bond‘s, the Bourne flicks, etc.), but whatever the logic, The A-Team is definitively just one piece of the pie, ghosting everything else and smirking, as it inevitably and perhaps appropriately, makes stupid amounts of money.

It’s interesting that on the television show’s Wikipedia page there’s a section on “Episode Structure.”  It outlines specifically the framework of every episode, with a subtext of every episode is basically the same.  I say this is interesting, because while there are elements of the film’s plot that seem to follow this breakdown, it’s far from basic.  We start with an origin; a sequence illuminating the random assembly of these former Army Rangers as something so miraculous, Colonel John “Hannibal” Smith (Liam Neeson) has to describe it as “fate.”  Whatever.  This motley crew completes their first ridiculous mission with explosions, rolling helicopters, and the kind of perfect timing that makes you scoff, and The A-Team is born: Hannibal, Lieutenant Templeton “Faceman” Peck (Bradley Cooper), Captain H.M. “Howling Mad” Murdock (Sharlto Copley), and Sergeant B.A. “Bad Attitude” Baracus (Quinton “Rampage” Jackson). 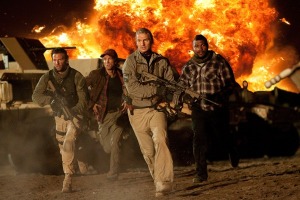 Their reputation becomes legend over the course of the next few years (I assume.  There’s no indication, though time has clearly passed.) and we find the boys on the doorstep of what will be their final mission as members of the armed forces.  A briefcase full of hundred dollar bill printing plates is the catalyst through most of the film and the cause of our protagonists’ dishonorable discharge and brief internment, and once the boys have broken free a massively scaled and bloody rat race for the plates ensues.  Certain parties’ are hungry for the infinite money, others are looking for their freedom, and a few just want to catch the guys looking for their freedom.  Among them: a rival group of mercenaries led by the inexorable Pike (Brian Bloom), an anonymous and thoroughly bankrolled CIA man-child known only as Lynch (Patrick Wilson), a boring and incompetent Army first-lieutenant Charisa Sosa (Jessica Biel), and, of course, The A-Team.  I’m not sure that there’s any way for me to briefly outline this story, as it is a tribute to convolution.  Just know that, despite all the hurdles and hindrances, The A-Team wins.  Oh, sorry.  Spoiler alert.

This script is bad.  I think I have a penchant for dressing up my opinions a bit, perhaps to a fault, but there’s no other way to say it.  It’s a shitty script from writer/director Joe Carnahan.   The dialogue is weak and far too charmed by itself.  As much as you might expect some humor to come from the quartet, or at least Bradley Cooper who’s proved he’s 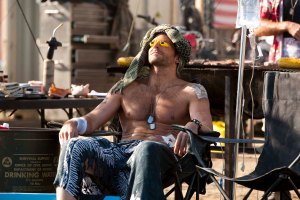 capable of it, the only humor you get comes in the looser moments and it comes solely from Murdock.  Sharlto Copley steals the show, and it’s a testament to the indecisiveness of the studio that the trailer features him for about six seconds.  Otherwise these are caricatures and their personalities remain mostly indiscernible.  I can only assume this is due, once again, to how bound the film is by the show.  The script insists repeatedly that each character do or say something in reference to the original character.  Hannibal, loving it when a plan comes together.  B.A. expressing regularly his crippling fear of flying.  Face basically trying to sleep with every single woman.  And lookout, because Murdock is crazy!

To an extent the awful writing is salvaged by some pretty cool action sequences.  The A-Team’s modus operandi is trickery and Hannibal’s schemes flirt with some of the cooler scenes in the Mission Impossible films.  One of these plans finds Bradley Cooper in a manhole with a massive electro-magnet, ready to hitch a ride on the underbelly of a truck.  Not bad.  Still, all this action requires a complete suspension of disbelief.  Not only do these plans come together in absurd ways, but they depend on the kind of timing that can only come in a movie.  If this too is a remnant of the show, it’s one better left in the eighties, because reality is far more exciting than magic.