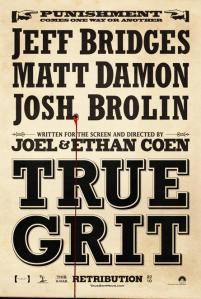 I don’t think there’s such a thing as a bad Coen Brothers movie.  Now, I haven’t seen them all, so I can’t say that with all confidence, but as they somehow gain more and more momentum with the passing years, and the veneer on their product keeps getting shinier, it’s hard to imagine them making any really evident mistakes.  Not only is this impressive when considering their startling prolificacy, but also because, frankly, the Coens don’t play it safe.  They’re not churning out standby material with rote characters and tested plots.  They change it up every single time. If I were an aspiring director I wouldn’t even bother trying to emulate them, because there’s just no way you’re going to do the things they’ve done.  True Grit is the latest example of that consistently inconsistent greatness; a cocky and witty western from a pair of legitimate talents in their apparently never ending prime.

Mattie Ross (Hailee Steinfeld) is on a mission for vengeance.  Her father killed by a hired hand named Tom Chaney (Josh Brolin) for some horses and a couple of gold pieces, the tenacious Mattie hires ol’ U.S. Marshall Rooster Cogburn (Jeff Bridges).  Cogburn is a merciless lawman, notorious for shooting first and asking no questions.  Pursuing Chaney for a separate crime is the Texas Ranger LaBoeuf 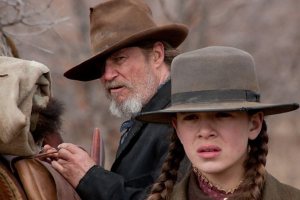 (Matt Damon), his approach to justice far more lawful than Cogburn’s.  Though the two men can’t seem to share a campfire without unrelentingly competing for most tough, their singular interest in Chaney sets them on the same course.  As the trio make their way through Indian country and towards their quarry, Mattie Ross crosses a bridge between her vision of an adventure and the truth of it.

Entering True Grit, it’s hard not to expect similarities between it and the Coen’s last entry into the Western genre, No Country For Old Men; the films even share Josh Brolin in pivotal roles.  Perhaps the most striking takeaway in trying to make that comparison is how little the comparison exists.  For one thing, True Grit is set very distinctly in bygone times, with a never-ending flow of Old West vernacular and the open sky environs so distinct to unsettled country.  Humor too dramatically sets this film apart.  None of the trailers express how genuinely funny the film is, with joyfully witty discourse and characters as bizarre and unabridged as any of the Coen’s best.  Think of John Goodman’s Big Dan from O Brother, or Buscemi’s Carl in Fargo, or The Nihilists in Lebowski. This film is just as loving to its extemporaneous characters as any of their best.

Of all the shiny pieces, it may be the screenplay that shines the most.  There’s not an ounce of fat to be found, and that includes the endless rambling by Rooster Cogburn.  Even in the minor exchanges the Coens are building characters, constantly pushing relationships in new directions.  It’s not just the interplay either, but the purity of the language.  I can’t speak to how true to reality and history their language is, but the brothers remain faithful to a time when everybody grasped the grammar of English and contractions hadn’t yet been invented.  Certainly the standout in delivery is Bridges’ Cogburn, a testament to 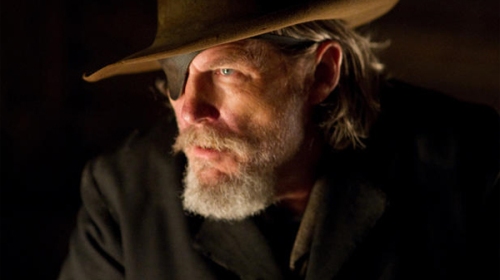 the dialogue and actor both.  This historical gab isn’t easily spoken, as a few of the lesser performances attest, but Bridges is a pro, and maneuvers the Coen’s rough and tumble jargon with ease and style.  The newcomer Hailee Steinfeld is a more complicated case.  It takes a little while as a viewer to feel comfortable with her delivery, though this seems more due to her age and the complexity of her speech then any weaknesses she might have as a young actor.  We’re always hesitant to accept an overtly eloquent child, as reality provides so few of them, but Steinfeld’s confidence (or Ross’ for that matter) eventually sways you.  In fact, once you get cozy with her character, Mattie Ross is a thoroughly likeable brat, years beyond her years and, in more ways then one, the most mature character you’ll meet.

Most striking towards the end of the film is realizing why this story matters.  Much of it seems just a traditional western, told by a child with a child’s point of view.  But as the narrator is a grown woman, it becomes clearer and clearer that the significance of this story lies in its significance to that narrator.  More clearly, this pursuit of Tom Chaney and blood bond built with Cogburn and LaBoeuf, this journey the three take together is the most important thing this woman has ever done.  She tells this story to us in her grayer years because regardless of where she goes or what she does, her dogged pursuit of vengeance for her father’s killer is the thing that will always define her.  And it was no small feat or insignificant act.  If one were to choose their defining moment, they could do far worse than this.

The Coens are always on the film radar, and it’s not by accident.  They, more than nearly any director(s) I can think of, have earned their stripes.  Their contribution to the Hollywood storytelling culture is nothing short of epic, and it’s exciting just being alive in a time when minds like these are making movies.  I don’t expect True Grit to win Best Picture, and it’s not my favorite film of the year, but it sits so beautifully in their legacy.  It is yet another great Coen Brothers Movie, and while their prolific greatness somehow makes “another great Coen Brothers Movie” seem almost blasé, I assure that you this story is anything but.