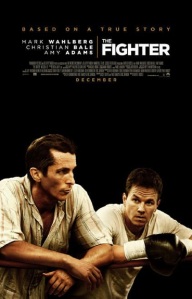 It seems that every year there’s a film like this.  A film that ends up feeling weighted more towards character portrayal than big picture.  A film with at least one performance almost guaranteed to bring home the Oscar.  Last year it was Jeff Bridges in Crazy Heart. Before that Heath Ledger in The Dark Knight. Before that Daniel Day-Lewis in There Will Be Blood.  The list goes on.  It’s not that David O. Russell‘s The Fighter is an incomplete film as much as it’s so entirely driven by its actors.  This based-on-a-true-story is clean and concise, and doesn’t require much sifting to get at a core comprised of an underdog vs. the world and the massive weight of his family.

Micky Ward (Mark Wahlberg) is a thirty-something road worker and journeyman boxer.  His older half-brother Dicky Eklund (Christian Bale) is his trainer, and was once upon a time quite the boxer himself, knocking down Sugar Ray Leonard in a fight and cementing his legacy as “The Pride of Lowell.”  Dicky has since formed a debilitating crack addiction and is the focus of an HBO documentary titled High on Crack Street.  Not only “The Pride of Lowell”, Dicky is the pride of his own family and the jewel in his mother Alice’s (Melissa Leo) crown, relegating Micky to second-tier.  Though she is his manager, her devotion to Dicky and “family first” keep Micky in fights he can’t win, and gain him a reputation as a “stepping stone” for other boxers.  Eventually Micky takes control of his own life, with the help of his girlfriend Charlene (Amy Adams) and a new manager, and begins working towards the title his brother could never nab.

The Fighter is a labor of love, in some form of production for years, with different actors and directors attached, and Mark Wahlberg forever waiting and preparing.  The actor’s body looks formidable and it seems about right that he’s been training for nine years to play this role.  Wahlberg had the real Ward and Eklund come stay with him at one point and had Ward on set, assuring a realistic 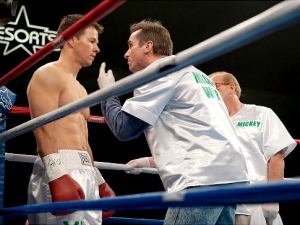 execution of the character.  Bale too spent time with Eklund, pinning down his mannerisms and staying in character for all of the shoot.  This is all a long way of saying, again, that performance is everything in this film.  As the lead, Mark Wahlberg is great, though he at times feels like just some other version of himself.  This can’t be helped, as both guys are from rough and tumble MA neighborhoods, Wahlberg even calling Ward a “local sports hero.”  Unfortunately though this character just isn’t far enough outside of Wahlberg’s comfort zone, and while he will probably garner a nomination, I can’t honestly say he deserves a win.  Christian Bale on the other hand should have the Best Supporting Oscar wrapped up.  While this is certainly not the first time we’ve seen Mr. Bale do something remarkable onscreen, this time around more than any of the others feels like the one that should win it for him.  Bale’s Dicky is a jumpy, messy, manic, sweet and frustrating character.  He is somehow both the glue that holds his family together and the least dependable part of it.  And it’s the back and forth between Bale and Wahlberg that really builds both of their characters most efficiently.  They banter like Boston brothers, persistently ripping into one another and then just as readily jumping to the others defense.  While I don’t personally connect to these ultra Bostonian-type characters (they’re too macho, too unwilling to back down from anything), I do appreciate the extent to which family is first and foremost for them.  Somehow, both Micky’s failures and his successes can be traced back to his family and his utter immersion within it.

It could be simply that David O. Russell is a good director for actors.  There’s no weakness in the cast, and it’s a cast that includes a number of people you’ve never heard of and a guy named Mickey O’Keefe, who has never acted before and is actually playing himself.  O’Keefe was Ward’s real-life trainer on his title run.  Melissa Leo comes back strong to the screen with a mother who may be the hardest character to root for.  Her Alice has blinders for anyone but Dicky, and is a talker more than a thinker.  Second only to Bale, Amy Adams plays one of her strongest characters to date.  While I like Adams, I haven’t really seen her do anything since Junebug that felt new or different.  Apparently she was aware of this stagnancy because she threw everything into playing a new character.  Typical of the Boston characters, Charlene is brash and bitchy and strong as hell, and the part she plays in Micky’s life is not only pivotal, but one of the best in the film.

Maybe what it comes down to with The Fighter, where my minor lack of enthusiasm stems from, is the fact that this is a personal story without much of a personal touch.  The film feels, at times, closer to a documentary than a drama.  This is a choice and not a failing, but it’s not the choice I would have made.  There’s so much potential to make the audience feel something really powerful, and while inevitably you do end up there, there’s not enough up and down while you’re getting there. 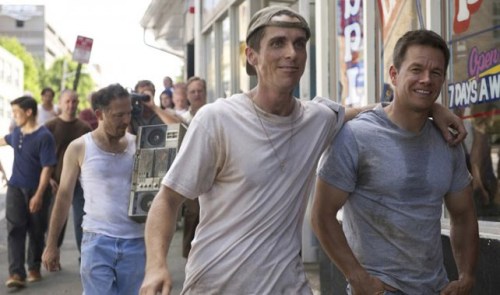 There are so many boxing films that The Fighter has to compete with, and it probably does end up towards the top of that long list.  Bale and Co. are good enough and the film is constructed with purpose and poise.  As far as breaching the upper echelon, the class of Rocky and Raging Bull, I can’t say for sure.  It’s a great film, sure to be nominated, but it’s so dependent on its actors that it’s simply not the whole package.  In a time of year when a film gets the same sort of scrutiny as a presidential candidate, and every new release is looked at as a potential Best Picture, The Fighter falls short, if only just.