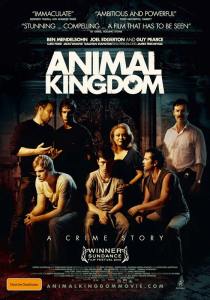 What Animal Kingdom does best is shock you. The violence of Director David Michôd‘s Australian gangster film is mostly sudden and stark. It comes out of nowhere, and once it has passed the film returns to an even-keeled plod, as though nothing has happened. This is certainly intentional, and the pie piece that makes Animal Kingdom worth watching.

Newcomer James Frecheville plays Josh “J” Cody, the nephew of the notorious Cody brothers; bank robbers, drug dealers, nice guy villains. As the local law close in on the Cody family, J finds himself caught in the middle, despite being essentially nonexistent in every interaction he has. Frecheville, presumably at the direction of Michôd, plays J with precisely the kind of permeating detachment you expect from a teenager. While this is an excellent theoretical choice for the tone of the film, it ends up leaving J a hard character to care about.

As J’s eerily manipulative Grandma Janine and the matriarch of this nuclear crime syndicate, Jacki Weaver has leapt out with an Oscar nomination as the most notable member of this cast. Certainly her performance is strong, though it takes awhile to get going, and even once she hits her stride it feels like equal parts performance and direction. A standout nonetheless, Weaver is not the only one in this performance-heavy composition. Guy Pearce, in one of his many recent minimal appearances, is as intriguing as ever. His Detective Leckie seems the only one in opposition to the Codys who has some idea of what’s going on. Meanwhile, Ben Mendelsohn as J’s Uncle Pope Cody is haunting and shadowy. Pope is the family’s active leader (behind its Oz-like grandmother) and his persistent mania keeps him unchallenged. The film’s one chief weakness is how much the story hinges on its final moment. Without revealing anything, this is a slow-paced film with a huge payoff. Without said payoff, it’s not much of a film at all.

Animal Kingdom is a relatively straight-forward genre film, with pacing deliberate and measured, and more than one career-defining performance.