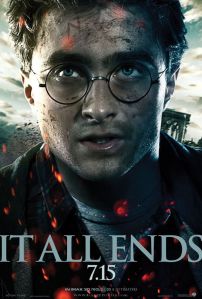 There’s a tendency to think of film as a superior medium or art form to television. To think of it as (mostly) having more integrity. While this may be true to an extent, one arena where film simply can’t compete is in subtle, measured character development. TV shows like Six Feet Under or Breaking Bad utilize their serial nature to not only develop characters within episodes, but across immense, series-long journeys. Film rarely has the ability or opportunity to challenge TV in this regard, which is what (among many, many other things) makes the Harry Potter franchise so unique. While the films have created a truly remarkable reality from the internationally-celebrated source material, it is our personal investment in the journey that matters most. Watching these characters grow together, learn, experience hardship and be heroic is a nearly unparalleled experience, and in the latest and last, Harry Potter and the Deathly Hallows: Part Two, that experience closes in an at once immensely satisfying and desperately harrowing finale.

After a brief dramatic re-up, Part Two picks up directly where Part One left off: on a hidden beach with our three heroes and a few stragglers. Harry (Daniel Radcliffe), Ron (Rupert Grint) and Hermione (Emma Watson) are still in search of horcruxes, and still grasping with fingernails at any piece of significant information. This desperation leads them to a break in of the Wizard World’s Gringotts Bank, complete with dramatic escape. And just like that, Act One is over, and we find our protagonists on their way back to Hogwarts. This return to their old stomping grounds brings them to Neville Longbottom (Matthew Lewis) and his rebel group of young wizards, and comes complete with an ovation that seems directed more towards the majestic old school than the three heroes. Upon his arrival, Harry sets in motion a devastating battle where lives are lost, legends are born, and The Boy Who Lived must face his villain Voldemort (Ralph Fiennes) in an emotionally grueling stand off. 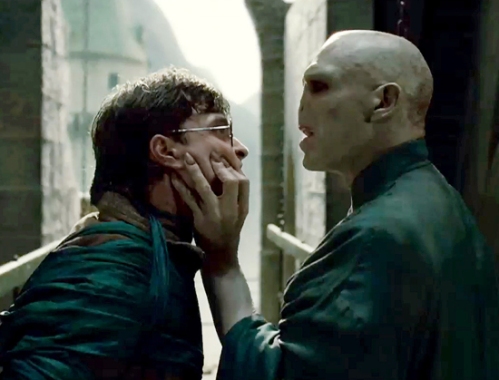 The strangest thing about the Harry Potter films, particularly towards the beginning, is the shifting tone. This is almost certainly due to the likewise shifting directors, with Chris Columbus helming the first two as syrupy kids’ movies, Alfonso Cuarón taking the third into a Burton-esque puberty, Mike Newell making his stamp on a pretty solid fourth film, and David Yates spectacularly ending the octilogy. Yates contribution to the Harry Potter films cannot be depreciated. Not only did he direct half of them, but he seamlessly brought the films to a realm of adulthood that is, not just more interesting, but necessary and hugely important to the story. While Book One of the series finds Harry Potter learning to fly a broomstick and playing with chocolate frogs, Book Seven deals with death in no small capacity. To be clear, lots of people die in this movie. Handling that sort of weight, while maintaining an atmosphere which never strays far from its roots is nothing short of remarkable. Watching this final film, you come to the conclusion that Yates isn’t simply a good director, but one who fully understands these characters and the world they reside within and the journey they’re completing. He tempers his darkness with light comedy, a choice which could have fallen flat but ends up working perfectly; we care so deeply for these characters and simply aren’t interested in a crucible. Yates knows all this, and his superb caretaking has lead to his best film yet.

Watching these young actors grow—and not just the three leads, but all of the Hogwarts standbys—is a powerful progression. Surely these kids were cast for their looks, as the first few films do nothing to suggest any of them will become great, or even particularly good actors. Lucky for Yates and Co., a number of the younger characters have developed into legitimate talents. Rupert Grint and Radcliffe in particular seem destined to escape the shadow of the Potter series, a feat sure to make many washed up child actors jealous. And while Emma Watson has grown into a breath-taking beauty, her skills as an actor have remained listless. Her approach to Hermione has never strayed far from a vacillation between teary-eyed and incensed, and the character in the books simply has more to offer. Meanwhile, the Potter series has never lacked for stellar adult talent, and key elements Maggie Smith, Alan Rickman, and Ralph Fiennes are afforded ample room to aggrandize their characters’ respective swan songs. The character of Snape could be called the stories’ most complex, and Rickman does everything within his power to bring a satisfying close to his story. As for Fiennes, his Voldemort is as wonderfully despicable as ever. Yates’ understanding of the character’s imperial solitude is hugely important to the franchise’s ultimate payoff, and the two work together to sell it in the most palatable way possible.

Unfortunately though, the books aren’t perfect, and this results in a few bruises on the film itself. Most notably, the epilogue sequence is entirely out of place and ineffective. Viewing this film in a packed theater, it felt as though the audience was generally committed to the experience, but at the first glimpse of an aged Daniel Radcliffe trailed by an aged Ginny (Bonnie Wright) with a baby on her hip, nearly everyone burst out laughing. Even worse was the damage done to Tom Felton‘s Draco Malfoy; his platinum mane thinned nearly to non existent, and a disgusting goatee glued to his face. I understand J.K. Rowling‘s use of this scene as a clean end to the tale, and an opportunity to make it clear that she is finished with the franchise, but on film, it’s simply bad.

Which is a shame, because this misguided epilogue is the last thing we get to see of the Harry Potter franchise. A franchise that has spanned a decade and spawned a cult-like following. The eighth and final film is a rousing success, despite a few brief missteps, and a production that every last member of the cast and crew can feel immensely proud to have been a part of. Rowling’s work, and Yates’ expert guidance have concluded one of the film world’s most remarkable series with a film both action-packed and emotionally exhausting. Taking this journey with these characters is unforgettable, and like any long, intimate, painful, and joyous experience, is, in the end, just a little bittersweet.