It’s not really possible to judge The Amazing Spider-Man on its own merits. That would be nice, but anybody older than 15 who sees Director Marc Webb‘s reboot must have also seen the original trilogy, which turns this all into a game of comparisons. And by comparison, Webb’s Amazing Spider-Man is mostly superior to Sam Raimi’s original film. How could it not be? In addition to having essentially none of the hurdles that Raimi dealt with, Marc Webb had the luxury of making a superhero flick in a post-Dark Knight world (more on this later). Past that, both fans and technology are more advanced then they were a decade ago, and the film that wowed us in 2002 simply hasn’t aged well. So, fine, Webb’s Webslinger wins, but does this victory deserve an asterisk? Depends on how you look at it.

It’s unfair to pretend that Webb or anybody involved with the production aspect of this picture set out to “beat” the original. That’s not how creativity works, and anyway, this newer Spider-Man would have a LOT more in common with its predecessor if that were the case. Unfortunately, Webb–and his two leads Andrew Garfield and Emma Stone–found themselves between a franchise that nobody in their right mind wouldn’t want to make their own, and a studio (Sony) committing perhaps one of the shallowest acts in movie history (making a film just to maintain their ownership of the story rights and get some quick cash). It’s impossible to ignore the impetus behind kickstarting another trilogy (quadrilogy? quintilogy?), and maybe that’s how it should be. If your goal is to judge the picture holistically than that is how it must be.

For my part, I think The Amazing Spider-Man should be regarded in the broadest possible terms, because even with the film’s shortcomings as a factor, it still might be the best Spider-Man movie to date. Let’s break it down:

First of all, it looks better. Of course it does. As film progresses, so do its artisans and technologies. Now, we could weigh the visual effects of Spider-Man and its Amazing counterpart relatively, but the unfortunate truth is that the visual effects in a superhero movie have a LOT to do with the overall quality of the film; the better they are, the better the film will be. Amazing Spider-Man has quality monsters and spectacular action, without most of the visual hiccups found in the previous trilogy.

Second, the script is better. Which brings us to what will almost certainly play a huge role in any future conversations about the superhero film renaissance of the aughts: Films made before Nolan’s Batman and after. While I don’t feel the need to be all hyperbolic about them, Nolan’s films are definitively the most realistic that we’ve seen in the genre, and this is a HUGE factor when you look at the spectrum of films dealing with comic book superheroes. We see movies because we want to have an experience, and the quickest way to that experience is to give us something identifiable, something relatable. In the case of superhero flicks, it’s not a matter of explaining every last nuance of a power or technology–audiences are perfectly willing to give the benefit of the doubt if shit simply looks cool–but a matter of bridging the (sometimes massive) gap in realism between a comic book character and a movie character. Comic book heroes don’t generally read like real people, especially not in their origins (which is where most of the franchise-starters are focusing). If you go back and watch Raimi’s first Spider-Man this becomes glaringly apparent pretty early, with over-the-top bullies and relationships that don’t really make sense. But when Nolan got his hands on Batman, his first move was stripping the story of any elements that might have felt dated or counterfeit. This tends to reside behind all of the other really amazing stuff Nolan has done with his trilogy, but without it the Batman films–and a number of other superhero films released in the interim–wouldn’t be the same. In Amazing, Peter Parker is a complex kid. Yes, there are elements of his personality that are geeky and reclusive, but these don’t define him. In fact, there’s little about this character that can be defined by a single character trait, which, actually, brings me to my next point…

The cast is better. So much better. This isn’t a surprise, as the cast on paper is far better, but the execution in almost every case is just…better. The differences between Andrew Garfield and Tobey Maguire are vast, both in their acting styles and their approach to the role, but Andrew Garfield may have just stolen Peter Parker from Tobey Maguire. With his fidgety charisma and gawky grace, Garfield brings maturity to a role that has been begging for it. In addition to being an effortlessly authentic actor, Garfield seems to have a better handle on the differences between Peter Parker and Spider-Man, bringing a fretful bumbling to the former that’s replaced by mouthy self-assuredness in the latter. It’s hard to not feel as though this is the best Peter Parker/Spider-Man we’ve seen yet. As far as the background players go, Martin Sheen‘s Uncle Ben and Sally Field‘s Aunt May don’t feel a hundred years older than their nephew; they possess the wisdom often found in more senior comic book characters, without the stodginess of the other films’ gray hairs. Kirsten Dunst’s Mary Jane Watson was a charming flirt, and Dunst is certainly a capable enough actor to have made the role her own, but Emma Stone’s Gwen Stacy feels more authentically like a high schooler, while at the same time making a better match for Peter Parker. And that improved chemistry is another facet of the better casting, as Stone and Andrew Garfield (who are, in fact, dating in real life) can’t share a screen without sparks flying. This vastly improved romance actually may be Webb’s biggest contribution, and has set up the sequel for some dramatically emotional possibilities. 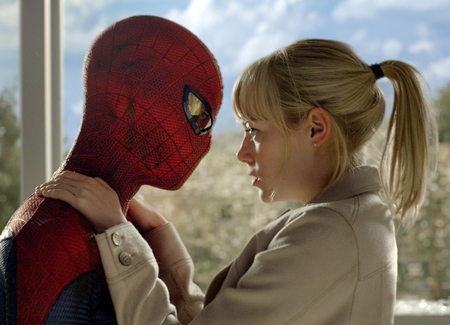 So, do the positives of The Amazing Spider-Man outweigh the inherent shallowness of a reboot? For me, absolutely. Amazing is not the best superhero movie we’ve seen so far, and if someone wants to argue that Spider-Man 2 is still the best of the series, I won’t argue. But trying to accommodate the lack of integrity of a studio in the process, no matter how unprecedented their actions, is just too messy, not to mention a dangerous precedent to set. Certainly Sony comes out looking like a bunch of number-crunching buffoons, but if we want to maintain the idealized grandeur of film, then the proof of success must be in the film’s quality and nowhere else.