The Best Film of All Time?

Way back in 1982, Vertigo debuted on BFI’s Sight & Sound Poll of Best Films at number 7. Since then it has slowly ascended, finally summiting the list in 2012, displacing the oft-thought irreplaceable Citizen Kane. No list is gospel, but the collaborative nature of the Sight & Sound, along with its tenure and visibility within the world of film lend the list a weight that few can counter. Which makes Vertigo a legitimate contender for the throne—the protean, elusive, much debated Best Film of All Time. Except, here’s the thing: it’s not.

Let’s play with some hypotheticals here. Let’s say that Vertigo was a modern release. Let’s say it came out in 2012 amidst the Masters and Beasts and Lincolns, and let’s say that the look of the film was updated so as to avoid distracting a modern audience, the general visual quality of the film cleaned up to fall in line with a modern offering. The script is the same, the shots are the same, but the film was released in 2012 instead of 1958. Objectively, this would not be a Best Film of All Time candidate. It probably wouldn’t even be a Best Picture nominee. 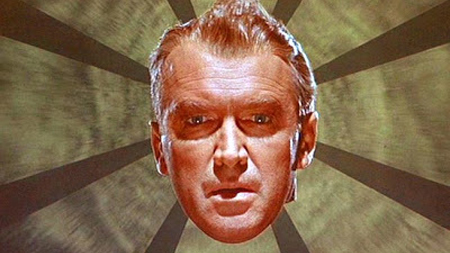 To be clear, this isn’t an attack on Vertigo. It’s a great film from one of the greatest directors, and that’s nothing to sniff at. But there’s an important question one must ask when finding so many past-era films hogging the top of these “Best of” lists. How can a film from a different era compete in every way with the decades of films that it inspired? Critics tend to be purists, referring to golden years of film that have long since passed, yet the nature of film (or any art form, for that matter) is to move forward, allowing the work of its progenitors to guide and hone the work of its progeny, resulting in an inevitable wear of time on films that once served as a guiding light for cinema. Auditing older films in this way can be an awful challenge, as far too often our chief perspective of a film is the first one we ever formed. Yet it doesn’t really do anyone any good to hold a film in high regard based on the context of the world into which it was released. For the medium to flourish we must view the films we have loved in the past through the lens of the present, because the nasty reality of film is this: Just because it was great back then, doesn’t mean it’s great now. It’s why a film like Bonnie & Clyde—once considered a bastion of New Cinema—is now, at best, a key moment in cinema history. It’s what makes titles like Citizen Kane or 2001—films stunningly ahead of their time—so uniquely special. And it’s the reason that Vertigo simply cannot be the Best Film of All Time. 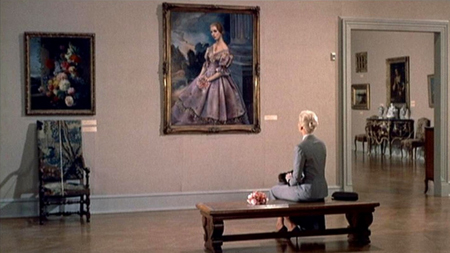 Vertigo does a number of things astoundingly well. The double structure is a stroke of genius, with the film’s first half producing a terribly compelling thriller, and the second opening up Jimmy Stewart’s Scottie in a way that reveals his motivations while illuminating his true colors. It’s a beautifully shot and composed film, with innumerable visual references to Scottie’s titular vertigo, and breath-taking color manipulation that pulls you into his tormented head space. Yet at the core of the film sits a love story that, for a modern audience, is virtually impossible to abide. Like so many films from eras past, the “love” in Vertigo is actually just lust and desperation, and like so many anachronistic directors, Hitchcock doesn’t seem to be too concerned about it. This life-changing, world-breaking love between Scottie and Kim Novak’s Madeleine is recklessly shallow, and results in an inevitable cheapening of both characters. 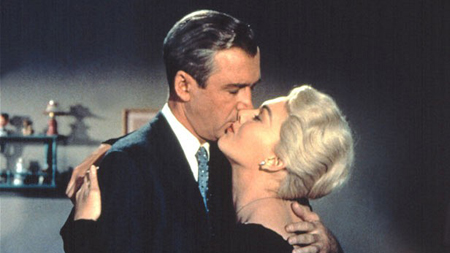 Consider: After being hired by her own husband to tail her, Scottie first sees Madeleine across a room, and in her elegance and beguiling blondeness, falls deeply, hopelessly in love. Despite having an adorably eager gal pal in Barbara Bel Geddes’ Midge—a character that nowadays would inevitably end up being The Girl—Scottie has eyes only for Madeleine. This becomes doubly problematic when we find that Madeleine is truly Judy, a foxy brunette living in a tiny hotel room, and lacking the grace of the contrived Madeleine. After the apparent suicide of Madeleine, and months of paralyzing depression, Scottie finds Judy, yet somehow doesn’t recognize the woman he loved so desperately. In the end, he drives himself crazy trying to recreate his lost love with fine gowns and dye jobs, when the actual woman is standing right in front of him. To recap: a man falls in love with his idea of a woman, loses her, finds her again without recognizing her, and attempts to turn her into the idea he loved. This is intriguing, sure, but it also unavoidably turns Alfred Hitchcock’s protagonist into a fool; a demented old lecher whose libido has crippled him beyond repair. Can someone so dense, so cripplingly insensitive truly be the hero of the Best Film of All Time? As for Novak’s poor Judy, whose love for Scottie is thick enough to accommodate his ceaseless alteration to her very personhood, should she be viewed as anything more than a sad sucker who simply fell into the wrong set of arms? 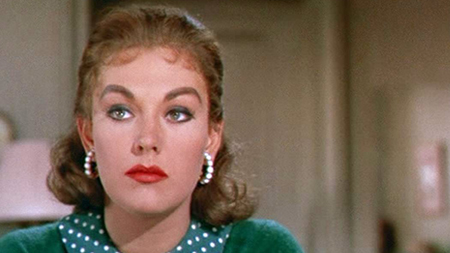 Modern audiences are savvier than they once were, more prepared to dig into the essence of a character and appraise his authenticity. We long for complexity because people are complex, and ultimately we want to find ourselves (or some imagined version of ourselves) within our protagonists. Thanks to his deranged unraveling in the second half of the film, John ‘Scottie’ Ferguson was never a wholly likable character, whether it be 1958, or now, or anywhere in between. But there are elements to his character that simply wouldn’t exist in a modern hero, and date the film considerably. He is brashly superior, with an unadorned disregard for women that often seems to color the leading men of that era. He is, quite conspicuously, not very good at his job. Yet Hitchcock doesn’t seem to present these traits with the intention of denigrating or investigating his hero. They’re simply there, distinctly antiquated elements of a movie from a different time.

I’ve always had trouble understanding why conversations on good film are so heavily weighted towards the medium’s beginnings. Critics and film lovers tend to revere the past and degrade the present, without appreciating the difference between experiencing an era first hand, and looking back at it through rose-colored binoculars. This is faulty for two distinct reasons: One, film is affected by context more than any other medium, and two, film progress happens visibly and with astonishing quickness. We cannot help but view modern films within the confines of our modern framework, and this is precisely how films should be viewed. A Best of All Time list will inevitably consider past contexts and older ideas, but treating these preceding generations of film as though they hold some unassailable purity is patently wrongheaded. Whether we like it or not, the nature of film is to move forward, and the nature of the past is to be altered by present points of view. It’s inevitable that films from the past will be diminished by the best work of the present, but more than that, it’s important that we appreciate the necessity of progress. Even if it spoils a film as hallowed as Vertigo.

6 responses to “The Best Film of All Time?”