Despite my best intentions, I’ve always treated black people differently than whites. I’ve never had a close black friend, and while my racism tends to reveal itself in an obnoxiously patronizing amiability opposed to a violent bigotry or snide superiority, my presence here isn’t bringing us any closer to a post-racial America. Maybe that makes me the perfect audience for Fruitvale Station, a film that endeavors only to tell the dreadfully true story of Oscar Grant in all its agonizing detail, and ends up carving a portrait of a man whose humanity is what makes his story so compellingly universal.

In 2008, Grant—played with a heartbreaking earnestness by Michael B. Jordan—was a 22-year-old black man with a testy Latina girlfriend (Melonie Diaz), a terribly sweet little girl (Ariana Neal), and a vastly patient mother (Octavia Spencer). Starting 24+ hours before the morning that an unarmed Oscar is shot in the back by a BART police officer, Fruitvale follows his last day, illuminating the man in his actions and relationships, creating a complex and imperfect character. This mosaic depiction is fundamental. More than simply providing us with an authentically human portrait of a man whose rough edges are essential in creating the whole, this passion to illustrate the good and the bad creates a trust between the character and the audience. This is not a film that prioritizes likability, or at least, not to its detriment. Liberties have been taken in Fruitvale, both in the interest of creating compelling drama and to ensure that viewers will connect with Oscar, but so what? The only people who will take issue with this are the ones intent on feeling vindicated in their defense of a white cop who shot a black man in the back, and their minds were never going to be changed anyway. Realistically, they’ll never even know that Fruitvale Station exists.

First-time Director Ryan Coogler, like Oscar Grant, is from Oakland. When Grant was killed and the Bay Area exploding with anger and frustration, Coogler was there. “I wanted to do something, not just about it, but something that could help keep these things from happening.” A sentiment that, in 2013, it’s a bit alarming not to appreciate. I am not Oscar Grant, or Sean Bell, or Trayvon Martin, but feeling rage, feeling impotence in the face of ceaseless police corruption and abuse is hardly a race-specific response. Technology has brought us into an era of light-shedding with regard to the way police so often choose to deal with minorities, and this increased awareness and perpetual helplessness has lead to protests, and riots, and the general sense that the police officers tasked with serving and protecting are generally interested in doing so only for one another.

Whether or not a film like Fruitvale Station will lead bigots to understanding is impossible to say, and effectively besides the point. We need as many stories like this as we can get, in whatever format artists want to give them. Fruitvale isn’t a success because it incenses and frustrates and serves as an inspiriting call to action. It’s important that it does these things, but ultimately the film was always going to be a success. Like any number of stories that reveal nuisances of race in the personal interactions of complex human characters whose race is ultimately secondary to their personhood, Fruitvale is a link in the chain of desensitization. It provides white audiences with a character who isn’t black for the sake of being black, but black because that’s how he was born. Perhaps this is a perfect storm of a powerfully true story in the right hands resulting in an unavoidably powerful film, but I believe the secondary success of Fruitvale—that it depicts a sweet, flawed, human man defined by his friends and family and mistakes, and not the color of his skin—is what makes it truly momentous. 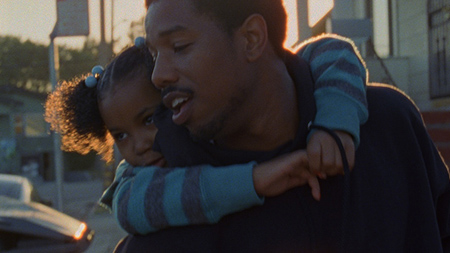 I’ll be the first to admit that this is an awfully white take on Fruitvale Station, but I’m a white man, and with a film like this in particular, it’s really all I can offer. I’ll never truly appreciate what it means to be black in this country, which is fine, because that’s a rich lesson in and of itself. Terms like “post-racial” are born in a sincere place; a place of empathy and a desperation to actually achieve a post-racial world. But we’ll never get there as long as we continue to ignore the realities of the world we live in now. Ryan Coogler has crafted a remarkable rookie film, telling a hard story with a gentle hand, and in the meantime capturing a career-defining performance from Michael B. Jordan, but there’s something about Fruitvale Station, something about the heartrending story of Oscar Grant that is inevitably and inescapably important. Cinema spends most of its time entertaining us, and then sometimes we’re lucky, and it enlightens us too.