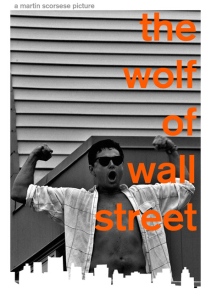 This is what success looks like now: 24-hour cocaine use, stripper parades, helicopters on yachts, quaaludes quaaludes quaaludes, tiers of high-priced prostitutes, European families flying your millions in their carry-ons to stash in Swiss banks, and other general excesses. Or more accurately, these are the accoutrement of a successful person. And the mantra of success is simple: “I deserve everything and I go first.” Jordan Belfort (played with contagious glee by Leonardo DiCaprio) articulated this in his autobiographical The Wolf of Wall Street, and Martin Scorsese has verified it in his three-hour epic of the same name.

A subtext of living in America goes something like this: “Capitalism is your birthright, and the truest calling is to spend your life in vague yet vehement pursuit of all the things you don’t yet have.” Scorsese didn’t choose Jordan Belfort’s story because of Jordan Belfort. He chose it because Belfort’s story best typifies the boundless excess we’ve somehow come to equate to “making it.” Forgetting for a moment the relevancy to our nation’s economic issues, and our zealous adoration of capitalism, this story is compelling for the same reason Cribs and Lifestyles of the Rich and Famous are compelling: We are fascinated by the tangible assets of absurd wealth.

In Wolf of Wall Street, Belfort and his cronies are both unrepentantly debauched and sincerely self-important, a lack of awareness that feels uniquely American, but is ultimately just human. Jordan Belfort and his number two, Donnie Azoff (Jonah Hill) — the founders of the film’s pivotal brokerage firm, Stratton Oakmont — have perfected the art of self-aggrandizement, doing no wrong as they cheat on their wives and blow lines at work. Ultimately they’re bitten by their hubris and the walls come tumbling down, but that’s beside the point. Scorsese isn’t teaching a lesson. (With the relatively minor sentence Belfort received, there’s not much of a lesson to teach.) What he’s doing is reminding us that these things — greed, corruption, infidelity, abuse — will continue to exist in perpetuity, because the remedy for them isn’t stricter rules or regulation, but a change in philosophy.

In the interest of full disclosure, Wolf ends with a contentedly post-prison Belfort addressing a room full of Auckland entrepreneurs, all happy to pay for the privilege. As we near the film’s end, this hoard of beaming Kiwis listens to Jordan Belfort intently, hypnotized by a man who’s only real gift is saying whatever it is others want to hear. We have officially exported the American Dream.