Tag Archives: Let Me In

As the season turns and we move toward the heartiest portion of the filmic year, it seems as good a time as any to take stock of what’s been seen thus far.  Certainly I haven’t made it to the theater for every new release, but 2010 has been for me a year of unrivaled theater going.  There are films on the horizon; Black Swan, The Fighter, True Grit and so on that promise to, at the very least, introduce some interesting characters and concepts, and at best hoist a golden statue at the 83rd Academy Awards.  Still, the year so far, while at times inevitably shallow and frustrating, has still seen some remarkable motion pictures pass into history.

Here are my Top Five…

END_OF_DOCUMENT_TOKEN_TO_BE_REPLACED 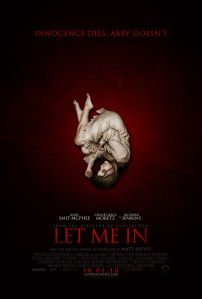 Let’s get it out of the way.  An American remake of 2008’s internationally successful Swedish film Let the Right One In was a bizarre choice and blatantly shallow.  I suppose one could say that the motivation for an Americanized version is based on the quantity of character and story, and not just that the film is marketable and vampires are hot right now.  Nonetheless, in the words of the original’s own director, “If one should remake a film, it’s because the original is bad, and I don’t think mine is.”  So then, a viewing of Matthew Reeves‘ less than scrupulous Let Me In can either be dismissed from square one, or it can be viewed and judged despite its bastardization.  Thankfully, I chose to do the latter.