You know what the worst part about having to write this review is? It’s that I was fully prepared to enjoy Green Lantern, despite the problems I was certain would be present. Any reviewer who tells you they approach every movie in the same way is lying, and movies like this one-movies with the clear intention of selling popcorn and building franchises-don’t come with high expectations. Which is why about two minutes into the film I found myself, not just annoyed that I spent eleven bucks on a ticket to a crap movie, but incensed at the abysmal execution of this big, green mess. Nearly every last choice made in Green Lantern is a bad one, and even aside from the technical stumbling, the film just isn’t much fun. No, “Director” Martin Campbell has done nothing here worth any praise. Certainly the effects work is good, but I’m giving the computer geeks credit for that.

END_OF_DOCUMENT_TOKEN_TO_BE_REPLACED

The night after my viewing of The Town, I had a dream that Jon Hamm was after me. It wasn’t a complex dream and I’ve mostly forgotten it, but I woke up feeling particularly tense. That dread feeling is what Ben Affleck‘s strongest film to date does so well; tension and anxiety and excitement, all are relevant adjectives for The Town, and all are present throughout. While Affleck may be a bit up-and-down as an actor, he seems to be finding a real niche as a director.

Ben Affleck is Doug MacRay, the leader of a professional foursome of thieves. Their heists are flawlessly executed, even on the occasion when MacRay’s partner James (Jeremy Renner) loses his head. In hot pursuit of Doug and his boys is Special Agent Adam Frawley (Hamm). Despite his better judgment, and a glimpse at a future with the charming Claire (Rebecca Hall), MacRay can’t get clear of the claws of local don The Florist (Pete Postlethwaite), or the depth of his Charlestown roots.

With his nomination, I assumed Jeremy Renner would be a scene-stealer, but the film’s biggest achievement is its ensemble. Renner is, as always, fabulous. He has a persistent restraint, a remarkable way of playing intense scenes at a slow-burn, and not just discharging his anger. Renner though, is hardly the key 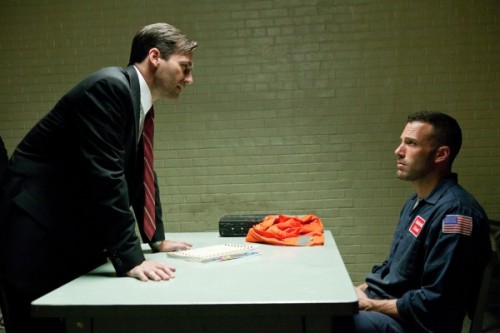 performance. Jon Hamm takes what could have been a rote “good guy” antagonist, and makes him a genuine villain. His Frawley is interested solely in bringing justice, and seems capable of literally anything to get at it. Meanwhile, plenty of smaller parts are delivered maximally. Blake Lively gets well outside of her comfort zone as a slutty addict; Postlethwaite is, as ever, a supreme talent and ominous creep; and Chris Cooper shows up for all of two minutes to steal a scene. As it turns out though, Affleck is perhaps the biggest surprise. Something about his performance here suggests he is finally coming into himself. A decade ago Affleck’s Doug MacRay would have been louder and sillier and more melodramatic, but here he is disciplined and subtle, and in complete ownership of one of his best roles.

After The Town, it’s clear that Ben Affleck is on the rise. Though perhaps a bit long in coming, maturity seems to have arrived in time to make him a genuinely exciting filmmaker.