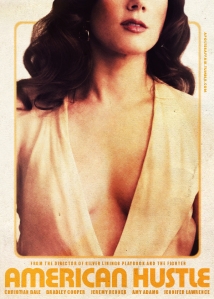 I just don’t have much to say about American Hustle. Not for lack of trying, but the film hasn’t given me much to think about since I saw it a week ago. It’s a perfectly okay movie built on a mildly interesting true story that has a few things to say about the follies of greed, and includes a pair of knockout performances. But more than all that, and first, it’s a film that reminds you how utterly flaky Academy voters can be.

END_OF_DOCUMENT_TOKEN_TO_BE_REPLACED

There’s no scenario where Joss Whedon gets the credit he deserves for The Avengers. Certainly he’ll be lauded for the cash this box-office bogart is already piling up, and critics seem impressed enough with the film to plant it firmly in the upper echelon of “comic book” movies. But the success Whedon has achieved is far loftier than that, encompassing years of Marvel canon, hoards of characters beloved to fans, and unparalleled expectations. Put another way: making this movie was an unprecedented challenge. And The Avengers isn’t perfect, though that was never really an option in the first place; there are far too many elements that would have to be handled flawlessly, far too much scrutiny from far too many directions to ever truly be called “perfect.” It is, however, as good as it was ever going to be, and considering the circumstances, that’s pretty damn good.

END_OF_DOCUMENT_TOKEN_TO_BE_REPLACED

The night after my viewing of The Town, I had a dream that Jon Hamm was after me. It wasn’t a complex dream and I’ve mostly forgotten it, but I woke up feeling particularly tense. That dread feeling is what Ben Affleck‘s strongest film to date does so well; tension and anxiety and excitement, all are relevant adjectives for The Town, and all are present throughout. While Affleck may be a bit up-and-down as an actor, he seems to be finding a real niche as a director.

Ben Affleck is Doug MacRay, the leader of a professional foursome of thieves. Their heists are flawlessly executed, even on the occasion when MacRay’s partner James (Jeremy Renner) loses his head. In hot pursuit of Doug and his boys is Special Agent Adam Frawley (Hamm). Despite his better judgment, and a glimpse at a future with the charming Claire (Rebecca Hall), MacRay can’t get clear of the claws of local don The Florist (Pete Postlethwaite), or the depth of his Charlestown roots.

With his nomination, I assumed Jeremy Renner would be a scene-stealer, but the film’s biggest achievement is its ensemble. Renner is, as always, fabulous. He has a persistent restraint, a remarkable way of playing intense scenes at a slow-burn, and not just discharging his anger. Renner though, is hardly the key

performance. Jon Hamm takes what could have been a rote “good guy” antagonist, and makes him a genuine villain. His Frawley is interested solely in bringing justice, and seems capable of literally anything to get at it. Meanwhile, plenty of smaller parts are delivered maximally. Blake Lively gets well outside of her comfort zone as a slutty addict; Postlethwaite is, as ever, a supreme talent and ominous creep; and Chris Cooper shows up for all of two minutes to steal a scene. As it turns out though, Affleck is perhaps the biggest surprise. Something about his performance here suggests he is finally coming into himself. A decade ago Affleck’s Doug MacRay would have been louder and sillier and more melodramatic, but here he is disciplined and subtle, and in complete ownership of one of his best roles.

After The Town, it’s clear that Ben Affleck is on the rise. Though perhaps a bit long in coming, maturity seems to have arrived in time to make him a genuinely exciting filmmaker.

With The Hurt Locker, I ended up watching a very different film than I intended to.  The plan was to sit down and enjoy a dramatic war movie with nuanced performance and subtlety; an Oscar contender.  By the end though, I was watching a high suspense thriller that happens to take place in Iraq.  It’s not an insignificant difference, and it was one I needed to make before I could fully appreciate what I was watching.  Expectation is often the bane of a viewer’s existence, and that’s never more true than when one finally watches an Academy nominee.  The film was released on June 26th and Oscar-buzz began shortly thereafter.  Ever since then, our unformed opinions have been molded by everything BUT the movie itself.  I hate this for a number of reasons, but mostly because it’s unavoidable.  Either see it opening day, or go live in a cave.  Otherwise you had better be prepared to do battle with the forces of subjective opinion, because brother, they’re a-comin.